Calendar boys pose for a good cause 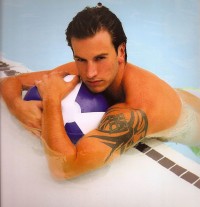 There’s nothing like 12 months of guys in swimsuits to create a little warmth on a cold day.

That’s the approach of Richie Arpino, the gay stylist and photographer who recently released his 2009 Swim Suit Calendar. We covered the release party here with plenty of photos here.

“Richie is one of my best friends and I know it’s for a good cause,” he told Buzz. Still, Gates, 27, of Canton spent a good portion of the shoot pruning up in a shower scenario before the photog opted to re-position him half-submerged and clinging to a beach ball in a pool. “It’s a living!” Gates joked at the launch party. “Plus, it’s kind of cool to know you’re on someone’s wall for a whole month.”

Arpino is donating all proceeds from this year’s calendar to the breast cancer charity as a tribute to his late sister-in-law Janie Arpino, who succumbed to the disease last year.