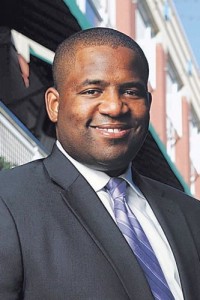 Ceasar Mitchell picked up the endorsement of the Georgia Log Cabin Republicans, the second gay group to back his City Council president bid this week.

The Georgia Log Cabin Republicans are proud to endorse Ceasar Mitchell for Atlanta City Council President. Ceasar has proven time and time again to be a loyal and true friend of Atlanta’s LGBT community.

In addition, His proven leadership and commitment to fiscal responsibility will ensure that we can fund our most important priorities, public safety, quality of city services, and the future infrastructure of our city.

Mitchell, an attorney and City Council member since 2001, was endorsed by Georgia Equality on Tuesday. The non-partisan group says Mitchell has worked to cultivate a strong relationship with LGBT Atlantans. He also recognizes that the city should improve its support of transgender residents through city policies, Georgia Equality says.

Mitchell is seeking the seat once occupied by Cathy Woolard, who became the first woman and openly lesbian president of the Atlanta City Council when she was elected in 2001. Woolard resigned the seat in 2004 for an unsuccessful campaign for Congress. Mitchell faces City Council member Clair Muller and Dave Walker in the Nov. 3 election.

Mitchell is hosting a meet and greet for LGBT Atlantans on Oct. 10. View the full event listing from the Project Q Atlanta community calendar.