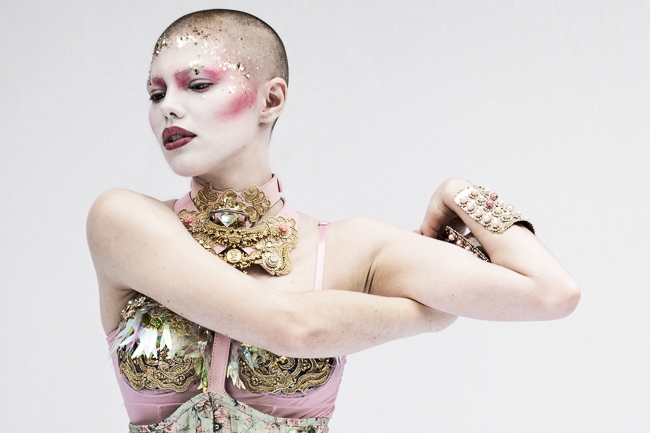 When last we checked in with Johnny Addison, his looks augmented with repurposed costume jewelry and mused by his silent partner, mannequin “Mugshott Cheryl,” set Q pages on fire. As it turns out, we hadn’t seen anything yet.

“Most of what I made this time last year was all skin and body harnesses,” Addison tells Q. “Now I’ve got a collection full of pieces that can be mixed and matched to create different looks. The dresses can be broken down into daytime looks, and each piece can be worn with the next.”

Of course, the fulltime hairdresser and part-time designer’s aesthetic in the latest collection stays true to his early visions of Avant Garde glitz and glam from reclaimed materials.

“Everything comes from estate sales, antique markets and great friends,” he says. “I’m inspired by Southern women, the silhouette of formal military uniforms, and the 1800s Victorian era.”

And his approach is inherently queer, Addison continues.

“Being gay influences my art in the way that I’m just a gay man being himself 100%,” he says. “I feel like I owe it to my younger self to express my artistic side, a side that was too feminine to express.”

The looks come together in ways that elicit responses, and Q contributor James Hicks was inspired to revisit Addison’s work again for our pages because he sees it as “wearable art.”

“The aesthetic is reminiscent of some of my design favorites, John Galliano and the late Alexander McQueen,” Hick says. “I absolutely love how the collection of pieces have evolved from accessories to actual garments. In my opinion, his work is genius.”

“Mugshott Cheryl’s work is absolutely fantastic, and I spent a lot of the session fawning over the stuff I got to wear and the stuff I didn’t,” they say. “I don’t really tend to dress conventionally feminine without wigs, so getting to dip my foot into a sort of feminine androgyny was really amazing. I honestly kind of felt a little ethereal.”

The collaboration of designer, photographer and makeup artist Jamie Kimbrough during the shoot was not only inclusive, kind and welcoming, it made for a reflection of the model’s own queer experience.

“As someone who is non-binary, I live most of my life toeing the line of gender nonconformity, which can be a major part of the queer aesthetic,” they continues. “It’s equal parts performance art and a reflection of the sometimes chaotic, sometimes beautiful aspects of the queer experience.”

It all came together in images including our cover shot, which Cheimis says felt like “a very commanding officer in a gay empire.”

Cheimis wasn’t the only one drawing inspiration from the artistic group effort. Hicks, who has photographed the likes of Angela Bassett, Pam Grier and Erykah Badu, as well as internationally famous drag queens and other celebrities, loves what the model brings to the table.

“I'm in awe, have great respect and a touch of envy for this generation, because they are unapologetically free and non-conforming,” Hicks says. “I admit that it has been challenging for me as a same-gender-loving man of color and of a certain age to make sure that I don't mis-gender or mis-identify individuals that I work with because they may not physically fit into my narrow idea of what they should look like. My experience with working with non-binary members of the LGBTQIA community has definitely broadened my scope of thinking.”

We couldn’t agree more. Keep scrolling to experience the queer magic the creative collaboraton cooked up, including outtake shots not seen in print.

This feature originally appeared in Q magazine. Read the full issue online below: