Busted for that wide-legged stance 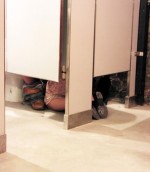 Some guys just haven’t figured out that when the urge strikes, sometimes you might want to take a deep breath, keep your pants zipped and not indulge.

Ed Wall didn’t figure that out. Neither did Larry Craig. Or two guys in a stall at Philips Arena.

What makes this story even more interesting is that for the last two months, most of the events at Philips have been Hawks games, Thrashers matches, pro wrestling and a Metallica concert. At least these two gay guys are breaking stereotypes. Well, some stereotypes.