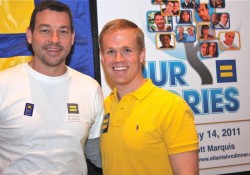 Nearly three-dozen gay-owned and LGBT-friendly companies put their sales pitch on the road Sunday to take part in a gay and lesbian expo in College Park.

The booths at the Community Expo from the Atlanta Gay & Lesbian Chamber of Commerce included large corporate titans, such as UPS, MetLife, Coca-Cola, Deloitte and SunTrust. 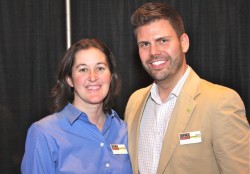 The vendors also included gay-owned small businesses — from Kardon Events, Common Ground Real Estate and D & Q Designs Balloon & Floral Events to Advantage Graphics & Signs, to name a few — there to pitch their wares to consumers and those on the hunt for jobs during the expo.

Also on hand at the event held at the Georgia International Convention Center in College Park were LGBT non-profits, including Out & Equal Atlanta, PFLAG, AID Atlanta, Out on Film and local organizers for the Human Rights Campaign.