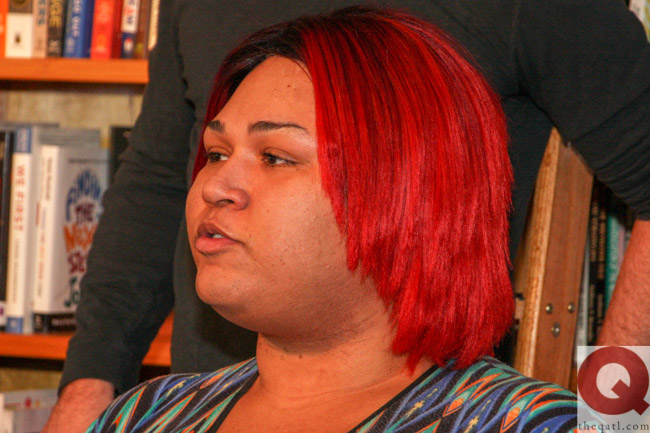 Performers who quit Burkhart's made it clear during a public forum they won't return unless the bar is swept clean of owners and managers who they say put in place racist policies and show little appreciation for them.

The entertainers spoke out Saturday during Burkhart's and Racism: An Organizing Meeting, an event hosted by Rainbros at Illuminarium in Poncey-Highland to explore possible responses to racist social media posts from bar co-owner Palmer Marsh.

Several performers told the crowd of more than 150 people that problems at the bar run much deeper than the handful of posts from Marsh.

“I can tell you story after story about what we've been through,” said Shavonna Brooks (top photo), who headlined Femme Fatale and performed in other shows at the bar.

“My fear is that we all are not seeing the same thing. I want to explain to you that those aren't kind people. They aren't nice people. They put restrictions on what we could do and sugarcoated it this week,” Brooks added.

The performers who spoke out at the meeting issued a stinging indictment of the bar's managers, not just Marsh and his wife Mary, who co-owns the bar.

“It's still the same people up in there saying don't do hip-hop because you're going to get those type of people rowdy and they going to tear up our club. All those people are still at the bar,” Brooks added.

“Palmer is the face of evil but he's not Burkhart's. Yeah, Palmer said the n-word. Yes he's racist. But Palmer ain't never in Burkhart's. The racist is [general manager] Don [Hunnewell] and [manager] Steve [Tallas] and his boyfriend. They are everyday making these rules and saying don't do this, don't let these people in. So nothing changed,” Brooks said.

Galore said she hoped the desire in the crowd to force changes at the bar would last.

“My fear would be that as a community that we are passionate, we're passionate for the moment but then we go back. We don't hold people accountable long-term,” Galore said.

Cheezburger cautioned white members of the diverse crowd to stop and listen to people of color, who detailed their complaints of facing problems in Burkhart's and other gay Atlanta nightlife venues.

'Spring board to action'

James Brian Yancey (second photo), a Rainbros co-founder who organized the forum on Saturday, also cautioned the crowd to turn their outrage into something more “than a flash in the pan.”

“My single hope is that this is a spring board to longer term action,” Yancey said. “The bigger concern is that we want to move forward and preserve the heritage of the space but in terms of the ownership, we need fresh clean ground to move forward.”

The forum on Saturday came hours after Hunnewell announced that Burkhart's was being sold. But the purported sale quickly collapsed and the bar remained closed. A representative from Burkhart's did not attend Saturday's event.

On Sunday, Ten owner James Nelson said in a Facebook post that he “made a very generous offer to Palmer” to purchase the bar but was laughed off as not being serious.

“Well, I will deal with the landlord when the doors close now,” Nelson wrote in his post.

The entertainers warned that a sale wouldn't necessarily pave the way for their return to performing at Burkhart's.

“You said OK, Palmer don't own it. You can say Jesus Christ owns it. But nothing changed if you still got the racist people running the bar. So nothing has changed. This is such foolery. No, we won't go back. They still don't get the reason why we're not there,” Destiny Brooks said.