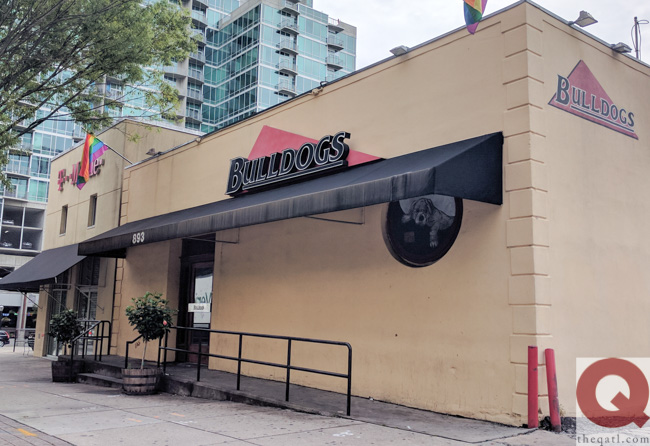 New skyrise apartment towers will soon surround Bulldogs, but the owner of the popular Midtown gay bar says he has “no plans whatsoever” to sell and leave his prime Peachtree Street property.

Permits were filed earlier this month to develop a 33-story apartment tower at the corner of Peachtree and Eighth streets, next door to Bulldogs on its north side. A 29-story mixed-use tower is nearing completion on the bar’s south side.

Bulldogs owner Brent Cochran-Maddox said the bar will remain in place. He bought the bar and the property it sits on from former owner Michael Clutter in 2017.

“There’s been several offers over the course of time, but I just have no interest,” Cochran-Maddox told Project Q Atlanta.

The 33-story tower at Peachtree and Eighth will be called 903 Peachtree, according to Curbed Atlanta. Chicago-based developer CA Ventures filed the permits to begin land development, which will include demolishing the buildings housing the restaurants Bezoria and Noodle.

903 Peachtree (images below) will house 417 apartments and 12,000 square feet of ground-level retail, according to What Now Atlanta.

Renderings and property records indicate Bulldogs will not be impacted by the new tower’s development, according to Curbed Atlanta.

A 29-story mixed use tower along 7th Street between Peachtree and Juniper streets has been under construction since 2016 and is nearing completion. Hanover West Peachtree will have eight stories of office and retail on the Peachtree side and 342 residences in the tower on the eastern edge of the site, according to Curbed Atlanta.

Bulldogs celebrated its 40th anniversary in 2018. Clutter said at the time that Cochran-Maddox was “the perfect guy to buy it from me.”

“I hope he operates it for another 40 years,” Clutter said.