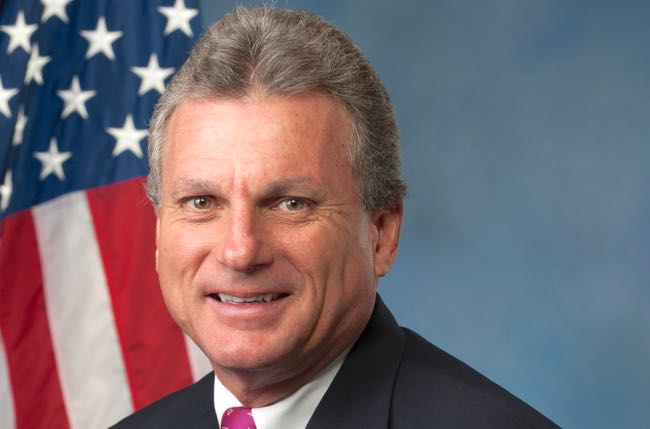 Georgia's own U.S. Rep. Buddy Carter – once concerned with which bathrooms transgender students use – now has a new target for his bigoted angst: transgender members of the military.

The Savannah-area lawmaker, on a town hall tour during the Congressional recess, said sorry not sorry when he agreed with President Donald Trump's desire to ban transgender service members.

That's the same Carter – serving his second term in Congress after years as a state and local lawmaker – that supports the First Amendment Defense Act and fired off a public letter opposing safeguards for transgender students. FADA, introduced in 2015, would offer protections to public employees who oppose gay marriage.

Carter, not surprisingly, has found support among members of Georgia's Republican Congressional delegation. U.S. Sen. David Perdue defended Trump's proposed ban, the Georgia Voice pointed out in its rundown of reaction to Carter's comments. Via Mic:

“I don’t think this is the time to have a social agenda conversation,” Sen. David Perdue (R-Ga.) said. “I think [Trump] is well within his rights [to impose the ban].”

Georgia's other senator, Johnny Isakson, waffled on the issue. And newly-elected Rep. Karen Handel surprisingly found some restraint and is taking a wait-and-see approach.

LGBT Atlanta reacted to Trump's transgender ban with a rally and march in Midtown.

A state lawmaker from Fayetteville proposed a bill that critics said could be used as a “sword for discrimination” against LGBTQ students in Georgia. State...
Read more
News

From A to Lil Nas X, the Out Georgia Business Alliance unveiled its first-ever list of the Most Influential LGBTQ+ Georgians this week. It...
Read more