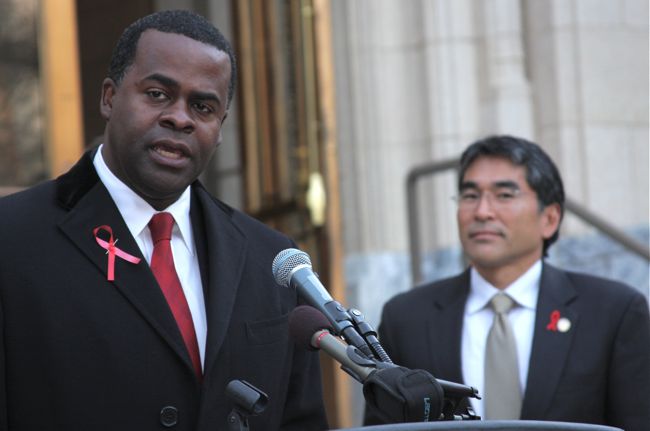 A bromance is building between Mayor Kasim Reed and gay City Council member Alex Wan. All it took was talk of Sunday cocktails.

Reed, who enjoys a tempestuous relationship with the city’s gay residents that Wan symbolically represents, was effusive over Wan’s work to nudge his City Council colleagues to approve a proposal allowing voters to decide if they want retail sales of liquor and beer on Sundays. That happened on Tuesday with a 9-2 vote.

Reed says he’ll sign the measure, paving the way to a Nov. 8 vote. We’ll forget for a moment that Reed is opposed to Sunday sales and focus on the praise he offered about Wan. 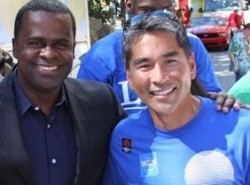 “I have a great deal of respect for Council member Alex Wan. He is the author of this legislation that was passed overwhelmingly by council. I’m going to sign it today.”

Aww, a budding bromance in City Hall. Is this just a case of beer goggles or the start of something serious?

After all, they both proclaimed their appreciation of Atlanta’s Black Gay Pride celebration and shared the spotlight on the steps of City Hall last December for Worlds AIDS Day (top photo). They walked nearly arm-in-arm in last year’s Pride parade (second photo) just a few days after they cocktailed together during a rooftop Pride celebration at City Hall.

Both men came to City Hall on Jan. 4, 2010 after a campaign season in which gay issues often grabbed headlines. But since, Reed and his police department have been plagued with cleaning up the continued fallout from the botched Eagle raid, which took place four months before his inauguration yet is something he stubbornly refuses to put to rest thanks to continued legal battles.

But as the bromance builds between Reed and Wan, there are some flags to be raised. Reed is a shrewd politician, a skill he polished during years at the Gold Dome and often on LGBT issues. Yet in 2009, Reed was soundly rejected by voters in the gay-heavy District 6 – the same area that Wan won by 20 points. Let’s hope this bromance is more than a politically-calculated chess move.

And if it goes the distance, keep in mind that this pair won’t be getting gay married. Reed doesn’t support same-sex marriage, a position that made his 2009 election more difficult yet something he reminded CNN viewers of in July.

So, let’s take it slow. A few Sunday cocktails and we’ll see where it goes from here.