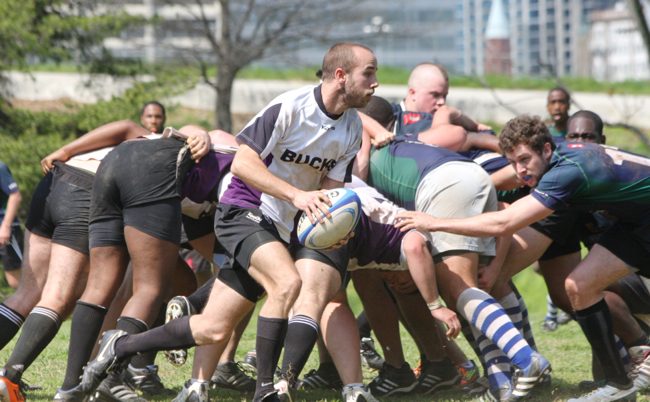 Forgive the Atlanta Bucks rugby squad for being slow starters. The gay jocks opened the biennial Bingham Cup with two losses but turned it on when it was most needed and capture the Shield division of the gay rugby world championships on Sunday. It was a similar path to the Bucks' last title, which came in 2008 when they opened Bingham with two losses and then went on to capture the Bowl division title and become the only North American team to win a title that year. Taking the trophy came as the Bucks fought foul weather and frigid temperatures in Manchester, England to capture the crown. The Bucks beat Chicago 8-0 to win the Shield division, one of four titles at the tournament. The squad described the long slog to the title in a Facebook post:

After two days of smash-mouth rugby against the some of the best teams here in Manchester, the rugby gods seemed to frown upon the Bucks' goal of winning hardware at this Bingham Cup. This morning, we awoke to frigid temperatures and a driving rain with gusting winds. It was worse than the conditions we had faced in Montgomery, AL in February. The Bucks were determined to not leave this tournament empty handed or shut out with any wins. First, we had to face the Nashville Grizzlies. The fire in our belly expressed itself on the pitch, as the Gryphucks (our combined name with Philly Gryphons here) shut out Nashville 22-0. This propelled us into the Bingham Shield finals, where... despite injuries, exhaustion and freezing half to death in a sleet... the Gryphucks left everything on the field and defeated Chicago 8-0 to become the 2012 Mark Bingham Shield winners!!! We're bringing home hardware!

The beer busts, the drag-clad jogging, the skills sessions and tackling all those college jocks paid off. Or maybe a naked Gareth Thomas provided some additional motivation. The Bucks coach, Zach Allee, reacted to the title with emotion.

It is with incredible pride and watery eyes that I say that the Atlanta Bucks just won the Bingham Cup Shield division against my beloved Chicago Dragons. This has been amazing and I love you all. With you!