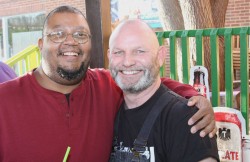 Don’t tell members of the Atlanta Bucks Rugby Football Club that the Super Bowl is really a bastardized American version of their beloved sport. They didn’t seem to notice during their beer bust on Sunday.

The gay rugby squad filled Frogs Cantina in Midtown for their “Pre-Super Bowl Beer Bust” that, no doubt, used all of the attention surrounding the big game to raise money for their own needs. It might not be rugby but if it can help their squad, then it’s OK to watch, right? 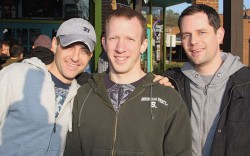 The Bucks take to the pitch on Saturday for the start of a seven-game spring schedule that will take them to Birmingham, Athens and the Bingham Cup in Minneapolis. First up is a home game against a visiting Athens club at Creel Park in College Park. On Feb. 20, they face local rivals High Country, which notched a shutout win against the Bucks in a muddy match last October.

The Bucks ended their fall season with a 3-3-1 record.