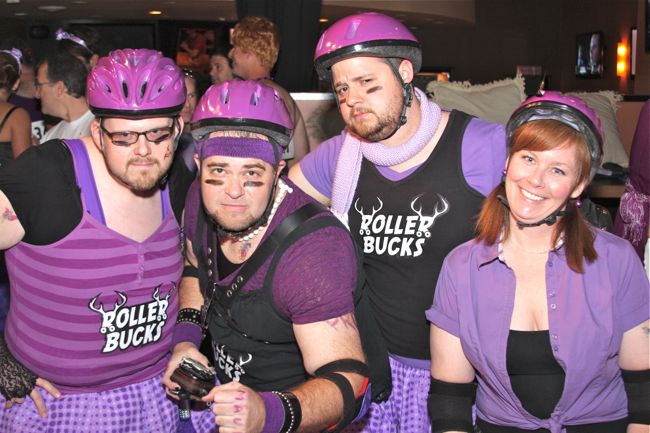 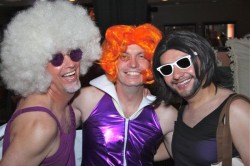 Drag queens for a day took to the streets of Midtown on Saturday dressed in their best – and worst — purple outfits to benefit the Atlanta Bucks Rugby Football Club. OK, cocktails were involved, too.

Participants strutted, crawled and jogged their way through the Purple Dress Run, the fifth rendition of the annual event that supports the gay rugby group. Also this year, the event benefits the MISTER Project of Positive Impact. 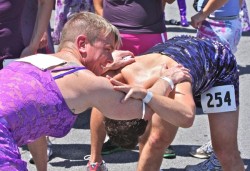 Final numbers aren’t yet available for the race, but the crowd seemed to come close to matching the 125 participants from 2009 (photos) and maybe even the 150 of last year’s event (photos).

They gathered at Mixx for kick-off ceremonies that included a stretching and warm-up session in the parking lot (third photo) before hitting the streets and heading south on Piedmont Avenue. Blake’s provided a pit stop before the purple clad crowd popped into Frogs and then found themselves on Charles Allen Drive before turning onto Ponce de Leon to end with a cookout at the Eagle. 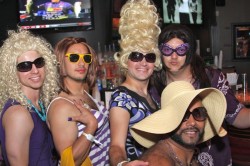 For at least the second year, the turn onto Ponce provided an akward moment as the crowd of drag-clad participants and burly rugby players neared the Eagle. That’s where the Atlanta Police Department was working the street – and nearby Krispy Kreme parking lot – to raise money for Special Olympics Georgia. But a few doughnuts, some cocktails and lots of purple dresses were enough to overlook the sting of the police department’s botched raid of the Eagle in 2009.

The Bucks now turn their attention to the upcoming Atlanta visit of rugby stud Ben Cohen. The British rugby star and gay-rights supporter kicks off the U.S. leg of his acceptance tour with three days of exhibitions and fundraisers in Atlanta that range in cost from $25 to $600. The events run May 19-22.