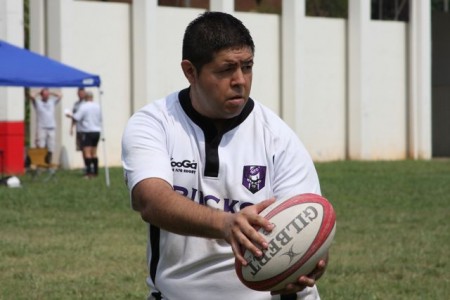 Not content to sit back and reflect on their trophy from the Bingham Cup last summer, the club is pushing ahead and working to improve as they dig into their fall season. The Bucks open their home schedule on Saturday at 1 p.m. against the Nashville Grizzlies.

The match could provide the boost the Bucks (1-1) need this season. In two spring matches, the Bucks owned the gay Grizzlies, beating them 62-0 in March and 51-3 in February.

“With the fall season starting, the Bucks are trying to stay hungry and continue to get better,” says Bullet Manale, the Bucks’ president (right photo). “We cannot linger on our Bingham Bowl championship throughout the fall.”

In June, the Bucks won the Bowl, the mid-tier division of the Bingham Cup, and received their trophy from Alice Hoglan, the mother of Mark Bingham, the gay rugby player from San Francisco who died in the Sept. 11 terrorist attacks. The tournament was created in 2002 to honor Bingham.

“There has been excitement from Bingham. There is still a sense of pride from our accomplishment,” Manale says. 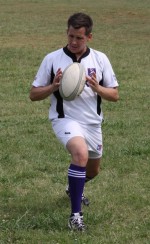 The fall season started slowly for the Bucks, dropping the opener against Chattanooga 74-7. A week later, they downed the Charlotte Royals, a gay team, 43-7.

“The Charlotte match was good for us. We were much more offensive. We were up the entire match. The lesson learned is ‘to step on the gas’ as Coach [Jeff] Mundie says. We could have put the match away earlier,” Manale says.

The Bucks added six players to their roster, a boost in part from “Rugby 101,” a preseason training session on Aug. 16 that brought together old and new players for skill sessions. (View a Project Q photo album from the event.)

“The Bucks have six new players. They have brought such a great energy to training. The newbies are picking things up much faster than any group we have had. I am very excited about their future in rugby,” Manale says.

The Bucks enjoyed a two-week break leading up to the match on Saturday, time the club used to focus on fitness and tackling, he says.

The Bucks match on Saturday begins at 1 p.m. at Coan Middle School on Hosea L Williams Drive in Kirkwood. It’s free and open to the public.