Bucks get dragalicious for fundraiser [photos] 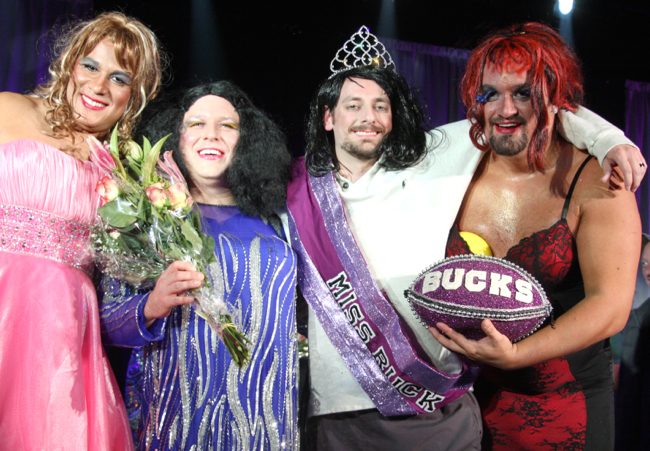 When burly gay rugby players swap their jerseys and shorts for skirts and wigs, expect a bawdy show. So goes the annual Ruck & Maul pageant from the Atlanta Bucks Rugby Football Club.

The gay rugby club staged the seventh rendition of its largest annual fundraiser on Saturday. And the event just keeps getting better – donations to contestants and purchases from the silent auction helped the club raise a record $12,500. This year, Ruck & Maul benefits the Bucks and Saint Lost & Found, a new emergency shelter for LGBT teens created by the Atlanta Sisters.

A handful of contestants performed in front of a large crowd at Jungle in an effort to take the crown from Barbie Q. Sugarbaker (bottom photo), who won the title of Miss Ruck & Maul at the event last year. The contestant who rakes in the most tips wins the sash.

And Ms. Chappeau (top photo second from right) did just that, despite a high-heeled crash during her last number that left her with a knee injury. Juenita Whopper, who shamelessly bribed emcees Gary Durden and Ruby Redd with burgers and fries pulled from her bosom, took first runner up.