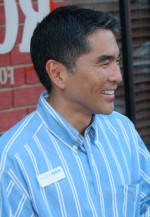 Alex Wan, showing he’s tapped into a base larger than just the gay residents of District 6, received the backing of an influential Buckhead business group to help fuel his runoff with Liz Coyle.

Wan, who is gay, topped a field of six candidates last Tuesday in the race for the Midtown post on the Atlanta City Council. Coyle narrowly secured second place and the two will meet again in the Dec. 1 runoff.

“While District 6 does not fall within Buckhead, its intown neighborhoods are of course a vibrant part of Atlanta and our members felt it was important to demonstrate our support of Alex,” Sam Massell, president of the Buckhead Coalition and a former Atlanta mayor, says in a release issued by the campaign Monday.

“His impressive business experience and remarkable history of civic leadership will make him an excellent addition to the Atlanta City Council. His platform emphasizes things that are important to us citywide: Relieving the property tax burden on homeowners, making City government more efficient, ensuring tax dollars are spent wisely, and redoubling efforts on public safety,” Massell adds.

Wan, who beat two other gay candidates in the District 6 race, says the issues faced in Buckhead are similar to those that District 6 residents encounter.

“I am truly humbled by the support of the Buckhead Coalition and especially appreciate the fact that they are embracing universal issues that affect all of us in the Metro area – in District 6, in Buckhead and elsewhere,” Wan says in the press release. “For instance, the responsibility we all have to balance sound economic development with the unique character of our residential neighborhoods.”