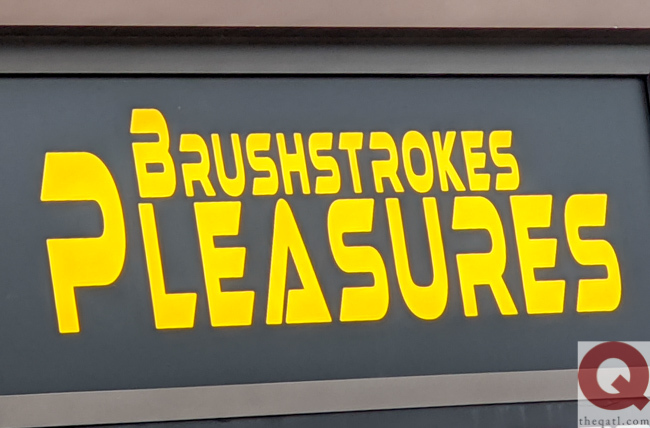 There’s no statewide rule demanding face coverings are worn inside commercial businesses, but even before Atlanta Mayor Keisha Lance Bottoms imposed a local mandate, one LGBTQ Atlanta shop played it safe by instituting its own mask requirement: Midtown’s own Brushstrokes.

And customers are largely abiding by the rule, according to owner Mark Jackson.

There have been the occasional outliers though.

“People have threatened us, we’ve been cussed out, we’ve had things thrown at us because people do not think we have a right to ask them to wear a mask,” he said. “But it’s so few and far between.”

The adult store and gift shop in Ansley Square reopened in May after a five-week shutdown due to the pandemic. Jackson instituted a number of precautions to create a safe environment for customers and staff. Employees wear masks and gloves, plexiglass separates customers from the registers, and hand sanitizer stations are placed around the store.

“My employees have been fantastic,” Jackson said. “I’ve never seen them clean so hard and be so diligent.”

“Our customers are family,” he said. “I’ve known some of these people since they were 18 and now they’re in their 40s, so you worry about family naturally.”

Business has been slow since the reopening, but it’s picking back up.

“A lot of our customers are unemployed,” Jackson said. “They don’t have money to spend.”

And many of Brushstrokes’ vendors also shut down temporarily, which caused a product shortage.

“Some product is very difficult to get in right now, which can frustrate customers,” Jackson said. “We’re still getting in orders that were supposed to be in for March. It’s kind of a balance of trying to make sure if we have to shut down again that we don’t go under financially. At the same time, we have to have product available.”

Jackson is “extremely concerned” about the rising infection rates and a possible second shutdown. In the meantime, he’s finding new reasons to value his customers and everyone enduring the pandemic together.

“We’re grateful for people that are supporting us and grateful that they understand that we are out of things,” he said. “I’ve been in business 31 years and it’s still nice to see that people do trust that we’ll do the best we can for them. I just turned 62, so I’ve had this business half my life, and that’s such a cool thing to be able to say.”

This story is made possible through a grant from Facebook Journalism Project’s COVID-19 Local News Relief Fund. Read all of the Q coverage of the pandemic and reopenings.