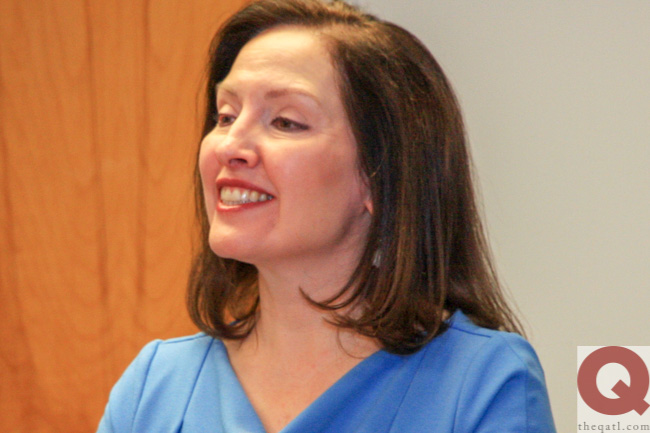 Brookhaven will vote on a sweeping LGBTQ-inclusive nondiscrimination ordinance in January, putting it in line to join a handful of other metro Atlanta cities who’ve adopted such protections in the past year.

City Councilmember Linley Jones (top photo) confirmed the plans during a community meeting on Monday at Brookhaven City Hall. The ordinance will be discussed during the council’s Dec. 10 meeting, then a vote will follow during the January meeting, she said.

“We feel like this needs more community input and feedback and vetting,” she said.

But Jones said she hasn’t heard any negative feedback about the ordinance yet.

“I really haven’t received anything at all which I take as a sign of support,” she said. “I think that’s a good thing.”

City Councilmember-Elect Madeleine Simmons, who co-hosted Monday’s meeting with Jones, said she also hasn’t heard any criticism about the ordinance.

The current draft of the ordinance would prohibit discrimination based on sexual orientation and gender identity in private employment, housing and public accommodations, according to Jones. The ordinance also bans discrimination based on race, color, religion, national origin, ancestry, sex, age, disability, marital status, familial status or veteran/military status, according to City Attorney Chris Balch.

Balch issued an informal opinion earlier this year that the city may not have the authority to pass such an ordinance, according to Reporter Newspapers. Jones told the paper in November that a resolution showing support for LGBTQ people was one alternative, but activists said that doesn’t go far enough.

Jones said Monday that the city plans to move forward on an ordinance. She envisioned a policy that, after a complaint was filed, would go to mediation between both parties. Then a hearing officer would rule on the complaint if it’s not resolved in mediation. This mirrors the process of most of the other metro Atlanta cities to pass such policies. 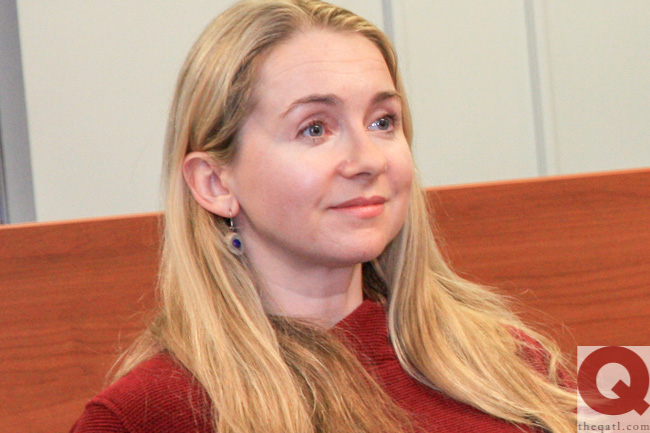 'It's the right thing to do'

Nearly all of the 30 people in attendance at Monday’s meeting spoke out in favor of the ordinance.

Amanda Lee attended the meeting with her child, Xander. She and her wife are Brookhaven residents.

“We’re just here because this is a personal issue for us,” she said. “This is our family. And we want to make sure that our family is welcomed and supported in Brookhaven.”

Steve George, a city resident and business owner, attended the meeting with his wife, Kim.

“This is really important,” he said. “It’s the right thing to do and it’s been quite a while to have taken this long to get something on the board.”

But Catherine Bernard (second photo), a city resident and criminal defense attorney, worried that the ordinance could have unintended consequences and lead to lawsuits.

“I am skeptical of the idea that a new law is going to be the long-term solution because my fear is what you end up doing is just creating a new legal cause of action that allows the people who can fund a federal lawsuit to have a much larger and louder voice than maybe the people who have suffered the greatest injustices,” she said.

“I’ve seen a great deal of change. And this continues that process and that change,” he said. “There is no them. We’re all human beings, we all travel the same journey and we all need each other’s help.”

“Whatever puts us closer together, I am deeply in favor of,” he added.

Bernard ran in the Republican primary for the House District 80 seat in Brookhaven in 2016. Meagan Hanson won that primary andousted Taylor Bennett, a staunch LGBTQ ally, in the general election. Matthew Wilson, who was at Monday's meeting,beat Hansonin 2018. He is one of the five openly LGBTQ members of the legislature.

Brookhaven Mayor John Ernst told Project Q in October that he is in favor of the ordinance. The effort to pass it is being led in part by a group of people who want to honor the memory of Richard Rhodes, the trailblazing gay activist who died in July at 81. Rhodes lobbied the Brookhaven City Council for the ordinance until his death.