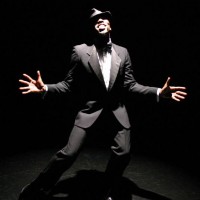 Eric Jordan Young wasn’t always in the limelight. As the only black kid in his upstate New York school, he grew used to being compared to Sammy Davis, Jr. Years later, his show “Sammy & Me” appreciates it.

“Sammy was a frame of reference for white people as a black person who sang and danced,” Young tells Project Q Atlanta.

“I didn’t always appreciate it, but when I went to college, I discovered more about him being an all-around entertainer on Broadway, TV and movies, as well as a person who fought for civil rights, and that started a huge personal interest in him for me,” he says.

The show was almost literally a lifetime in the making. Atlanta gets to enjoy its full glory at the Alliance Theater beginning Wednesday.

Even as Young (photos from “Sammy & Me”) moved into theater work and spots on Broadway and in touring productions, the Davis comparisons just kept coming. He got offers to do some styled shows and was selected to do “Mr. Bojangles” by the Sammy Davis, Jr. Estate.

“I realized this was something I had to pay attention to,” Young says. “I had this idea of turning my own life into this storytelling idea using Sammy Davis Jr. material. The first thing I needed to see was if I could accommodate his big voice and sustain that famous stamina.” 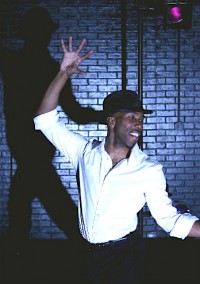 He could. And with research and practice, “Sammy & Me” became much more than a cabaret show. The stage production that opens Wednesday at the Alliance is a dual biography that ultimately teaches lessons about self-discovery and the pitfalls of hero worship.

“It’s a commentary not only about my own self discovery running parallel with his story, but about what happens when you find your heroes are flawed,” Young says. “It delves into how we identify ourselves with others and thinking they give us possibility. On the flip side, it places judgment on me if I love someone too much. If heroes are flawed, I can be judged by who I emulate and put on a pedestal.”

“There are 35 characters who talk to each other, but it’s just me on stage, so it plays in a unique style,” he says. “And of course there are 15 of Sammy’s classic songs, so it has moments of cabaret but also several levels of drama, happiness, joy, pain, embarrassment and growth.”

Along with Young’s own story, the show follows Davis from the tap dance beginnings of his youth on the “Chitlin’ Circuit” to a major headliner on the Las Vegas strip and a fixture of the infamous Rat Pack. Along the way, it uncovers the intricacies of being an entertainer caught between his own racial identity and his drive to transcend race as a performer.

As a gay performer, Young says gay audiences will appreciate some of the show’s deeper messages.

“Sammy was a person who wasn’t afraid to be himself, and a lot of his choices were difficult, but he retained a sense of self,” the entertainer says. “There are times in everyone’s lives where you feel like you’re the only one going through a situation, and this show discusses that and really recreates moments of being alone. I think gay audiences will relate to that.”

“Sammy & Me” has played several high-profile runs, including performances at the Alvin Ailey Studios in New York and the National Black Theatre Festival. After Wednesday’s Atlanta opening, it runs through Oct. 24 on Tuesdays through Sundays with two showings on Saturdays. For tickets call 404-733-5000, or visit the Alliance website.