‘Bring It On’: The Musical’ breaks new ground 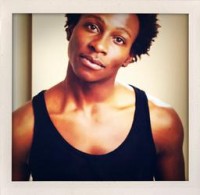 Gregory Haney is excited not only about appearing in the splashy world premiere “Bring It On: The Musical” in Atlanta, but also about bringing to life what could be an audience favorite: a fully accepted transgender character.

The musical, in previews now at the Alliance Theatre before officially opening next week, draws its inspiration from the often campy “Bring It On” movies. Two rival high school cheerleading squads compete for a national championship. One of the teams is white and the other is African-American. Neither team wants to lose – especially to each other.

“She is her own woman, all about doing what feels comfortable to her,” Haney says. “She has a tight miniskirt and a big Afro, and she is very outspoken. She is part of the ‘it’ cheerleading crew, the ones to hang out with. And she has great friends. For me, it’s nice to see that no one has a problem with it. There is no hatred, no bullying.”

Although there is no direct reference to the character being transgender, it’s easy to figure it out.

“The first time you see the character, you kind of wonder,” Haney says. “There is no mention, but hints. The character chooses to dress this way, and no one questions it.”

He laughs that as a former football player, he is fairly muscular, squeezed into a cheerleading outfit, so there shouldn’t be any doubts.

Haney created his own backstory for the character of La Cienega, remembering what it was like to be in high school.

“There are some many things you don’t understand [at that age], and so many things that fall by the wayside as you become an adult,” he says.

The actor says that first and foremost the musical is fun (he jokingly refers to it as “Heathers” meets TLC) but also has a message, primarily with the character of La Cienega.

“It doesn’t matter what you look like or who you are – it’s about loving who you are,” he says. “In her mind, if someone has a problem with it, they need to move on.

“I think it’s nice that in a time where students have taken their own lives, no one bats an eye at the character. She is fierce. I am not going to lie. If you cross her, she will cut you. She wants everyone to do what they want to do. She is over the top but real.”

“Bring It On” has a creative team with superstars in every corner, including a script by gay “Avenue Q” writer Jeff Whitty. It’s directed by Andy Blankenbuehler of “In the Heights,” while his collaborator from that show, Lin-Manuel Miranda, is handling the music and lyrics. Also in the mix: Tom Kitt from “Next to Normal” and Amanda Green of “High Fidelity.”

“Working with all of them has been a great experience,” Haney says, noting that he is especially fond of Whitty’s ability to include three-dimensional LGBT characters.

“It’s a pure joy to work with him,” Haney says. “He is so in touch with how to deliver something both intelligent and clever.”

Getting the gig is definitely a career high point for the 28-year-old actor.

“When I found out I got it, I was so happy,” he says. “Literally it made my heart drop – getting to work with all these talented people on creating a new show.”

The openly gay performer says Atlanta and the Alliance Theatre are perfect places for the premiere.

“Georgia is one of the leading cheerleading states, and Atlanta has such a huge LGBT community,” he says.

Obviously there is cheerleading in the show, but doing the cheers has not been a major stretch for the tumbler and dancer. Haney admits that the cast and crew have been happy to have some real cheerleaders on hand in the production for feedback.