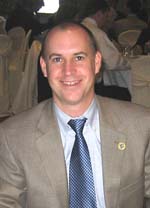 Brian Bates, the first openly gay Republican to win elected office in Georgia, on Tuesday announced his campaign to seek his first full, four-year term on the Doraville City Council.

He enters the race with key endorsements from Georgia Equality and the Gay & Lesbian Victory Fund. Bates is one of at nine openly gay men seeking local offices across metro Atlanta.

“The City of Doraville sits on the edge of opportunity and it is time for our community to rise up and take a hold of that challenge,” Bates says in his campaign announcement. “We have many challenges ahead of us, but I am confident, just like we have over the last 18?months, met them head?on and succeed.”

Bates was first elected to the District 2 At-Large post on the council of the DeKalb city in 2007 to fill the unexpired term of a city council member who resigned. Bates says a focus on community will drive his re-election campaign as the council navigates through an economic recession that has stalled growth in Doraville and across the region.

“With renewed interest in our neighborhood associations, renewed city sponsored community events, a newly formed Doraville Business Association, and the establishment of our very first community gardens, we have shown amazing resiliency over the years and now sprigs of growth are starting to appear where seeds have been planted. We must harness that energy and enthusiasm that is starting to spring forward and use it to move our city forward. We must work to ensure that Doraville is not just a stop along 285 and Buford Highway, but that our city becomes a destination,” Bates says.

Bates is one of three openly gay candidates in metro Atlanta to receive a nod from the Victory Fund. Adam Brackman, who is seeking the Post 1 At-Large seat on the Atlanta City Council, and Kyle Williams, who is running for the District 2 post on the Decatur City Commission, also received the group’s endorsement, which brings with it exposure to gay and lesbian donors across the country.

“Both organizations understand and appreciate the work being done to ensure that the City of Doraville remains a diverse and welcoming community. I am proud of the work we have done and look forward to the challenges ahead and working with my fellow elected officials, our employees, residents, and business community,” Bates says.

Eric Morrow and Kevin Hudson are running for seats on the East Point City Council.