Breaking up is hard to do (when cops are called) 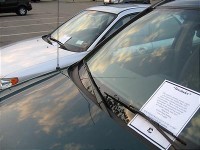 A stolen wallet, a love letter left on the car windshield, a trespassing warning, a call to 911 — this is definitely not a lesson in how to win back your boyfriend.

A 36-year-old man tells police that his boyfriend wants him back — and stole his wallet from the glove compartment of his car and left a note to prove it. Oh, the Blotter Diva from Creative Loafing always keeps us entertained:

Turns out, the same reporting officer gave the ex-boyfriend a trespassing warning about two weeks prior, instructing him to stay away from the man’s home on Sand Dollar Court. The officer told the man to call 911 if he sees the ex-boyfriend again.