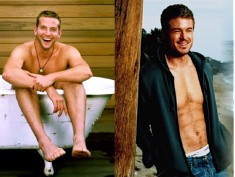 It’s not just a fantasy cooked up in a post-holiday haze. But it’s not quite reality either. Sex symbols Bradley Cooper and McSteamy “Grey’s Anatomy” star Eric Dane will play lovers on the big screen.

Don’t get too excited. It’s not “Brokeback Mountain 2” or anything.

Several gay media outlets are focused on the de-gaying of the “Valentine’s Day” trailer, which implies that Cooper’s and Roberts’ characters are a couple and makes no mention of the gay angle, but we just don’t care. OK, we care some, but if Hollywood trailers de-gay Tom Ford’s “A Single Man,” which is actually about a gay man, how could we hope for better in promotions of a chick flick?

We’re way more interested in these two sex symbols and their play-gay tumultuous affair. Dane plays a closeted gay pro athlete to Cooper’s smitten, forlorn boyfriend who has to keep the secret while longing for a more public commitment. Hot!

We couldn’t have dreamed up a better scenario ourselves. After storming the gay consciousness last year in “All About Steve” (aka “Sandra Bullock’s Latest Mistake”) and “He’s Just Not That Into You,” Cooper was due for a role that can secure his status in gay men’s hearts forever.

And Dane? Well, an internet sex video (sort of—more like a drug-infused naked romp with his wife and some hussy) and several towel scenes on “Grey’s” later, we’re just as ready to see him at least act like he could make our most intimate dreams come true.

Let’s do the math. Bradley Cooper + Eric Dane x chick flick ÷ all-star cast = we are so there.