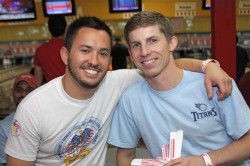 This if, after all, a gay sports league.

The season opened last month — view photos from a recent Sunday — and continues on most Sundays with all-day action at the fields of the West Metro Atlanta Softball Complex in southwest Fulton County. (Pack a lunch — it’s a bit of a haul if you’re one of those Midtown gays.)

But the off-the-field fun happens throughout the season, which runs into July, as most of the men’s and women’s teams hold fundraisers between game days. 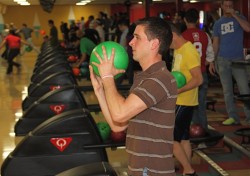 Some are pretty low-key, but others can involve drag queens, hundreds of fans and softball games. That’s the tack the Pink Cadets took on April 10 with its Bats-N-Rouge fundraiser at Piedmont Park. The Wet Demons held it’s pre-season beer bash at Joe’s on Juniper.

On Saturday, the Atlanta Titans offered up Bowling, Beer & Boys at Midtown Bowl. The bowling took a back seat to the beer drinking, but hey it’s a fundraiser, so who’s really keeping track?

The Titans also host the league’s after party on Sunday. It’s a tradition and the teams rotate during the season to offer up the fun and food after a long day of games. This week, the Titans move it to Cowtippers. 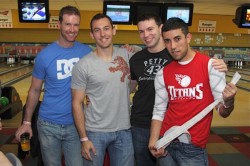 And the Pink Cadets, apparently not letting a weekend pass without some extracurricular activities, are planning a Scandalous Car Wash on May 15. It’s a celebration of diversity, too:

We will have all types from the community present–from twinks to bears and everyone in between. This event will guarantee your car will not be the only thing that will get wet. Why not enjoy the view from Cowtippers’ patio with a few drinks?

Once your car is clean, you can join the Pink Cadets for Jell-O shots. Sober up and then join the team for its Big Gay Amazing Race on June 5.