Both husbands put on pounds, but only one wants to change 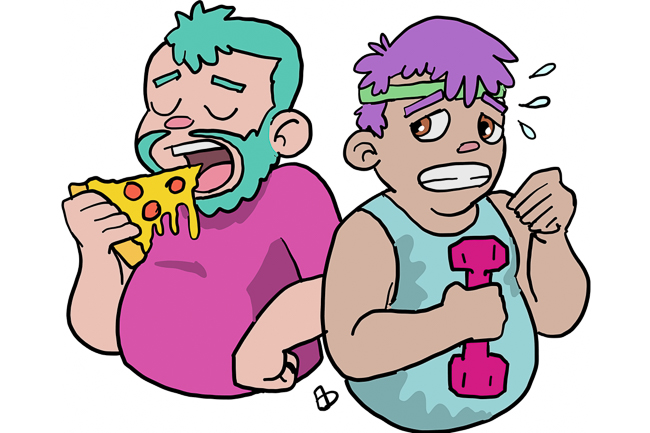 I have struggled with my weight for years, and so has my husband. We've both gained a significant amount of weight since we've been married, but I'm trying to mitigate that with diet and exercise. The problem is, he isn't; and every time I try to talk with him about it, he makes me feel like I'm the bad guy for bringing it up.

Look, we're both approaching 40, and I know we'll never be the “twinks” we were when we met, but I'd like to be better than I am, and I am finding it very difficult to get healthy without his support. He's pre-diabetic. He has sleep apnea. His sex drive is nowhere near what it was when we met. It's frustrating because all of this is correctable, and he's refusing to even try. It's like he doesn't care.

I love my husband. I will never “fat-shame” him, and I know my weight struggles aren't his issue. But I would find it a lot easier to tackle this if I feel like he were more supportive, and if he would try to be healthier too. I don't know what to do, short of giving him an ultimatum: it's me or the sugar, dude. Take your pick.

Every queer in the LGBTQ village has choices they need to reverse, demons they need to face, and habits that die hard. That makes your situation relatable, and your efforts admirable.

Talking with your husband about his weight is a great first step, assuming it’s done with love and concern instead of nagging. As his partner, you have a stake in his health. But even, or perhaps especially, in long-term relationships, the road to ruin is trying to change other people before their time. Not only does it build resentment, it just doesn’t work.

You can’t make it happen by caring about it for him. You already know this as a spouse. Those instances when you “make him” do things for his own good might work temporarily, but rarely for the long term. If he’s not ready, sometimes you have to discuss it and drop it. Upsetting him won’t help motivate him.

Regular readers of this column already know what comes next. If your husband was writing in for ways to make positive changes, that’s where we’d focus. Since you wrote, it’s about what you can change: yourself. The good news for your hus-bear situation is that you’ll set a good example and gain knowledge to pass on when his time comes.

The sugar-or-me ultimatum is ill-advised. Sugar (and other carbs, all of which turn intoa form of sugar) affects the same part of the brain as cocaine, so you’re battling an addictive chemical process and might not win. Surely, it’s not worth losing him in your effort to keep him.

Laying down the law comes from being frustrated — with him and with yourself for letting it get this far. Making changes might be easier with an accountability partner, but that’s not your reality. Just like him, you have to do it for you, and being upset isn’t going to help you to keep up the good work.

Lifestyle struggles get more difficult to manage when life gets busier and when we get comfortable in our routines and relationships. Weight gain in particular falls into that category, and unfortunately, we have to be even more diligent about it as we get older–even if “approaching 40” isn't nearly as old as you apparently think.

The good news is that the extra effort worth it – as you mentioned in longevity and in quality of life. After 50, you’ll start to see a marked difference in mobility and the ability to “just show up” between those who at least try to keep up with it and those who don’t.

There’s a trick to staying motivated: Don’t try. Enjoy motivation when it’s there, and know for sure that it won’t stick around. Instead, focus on discipline. Exercise and eat right even at those times when you don’t feel like it. Like brushing your teeth, it just gets done.

And yes, you are disciplined enough on your own. Tap into those skills from your career or other aspect of your life where you make stuff happen, and apply them the next time you’re headed to the refrigerator or considering couch surfing.

Chances are good that your husband will eventually notice the results and want in on it — and back into you. Invite him along for a walk, sneak in helpful hints when you can, but love your body enough to go it alone, at least at first and maybe permanently.

The Q is for entertainment and not intended as professional counseling. Send your burning Qs to[email protected], and read past columns at theQatl.com.

Pick up a new edition of Q magazine each week at LGBTQ and queer-allied venues around town, and read past versions ofThe Q advice columnhere.