Borders gets donation from anti-gay pastor 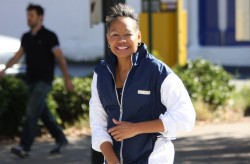 Lisa Borders, among a trio of gay-friendly candidates at the top of the race to become Atlanta’s next mayor, received contributions from an architect of the military’s ban on gays and an anti-gay megachurch pastor.

Both contributions were among those reported by the Borders campaign Friday in the latest round of campaign disclosure statements.

Also Friday, Project Q Atlanta reported that Mary Norwood, who is leading the mayoral race, received a $250 contribution from Mike Bowers, the former state attorney general who took his fight against gay civil rights to the U.S. Supreme Court.

Borders (top photo) insists that voters examine her track record on LGBT issues, not that of her long list of donors.

“My belief is that we should be inclusive and accept all people,” Borders said Sunday as she prepared to march in the annual Atlanta Pride parade. “We should not be judgmental at all. You are never going to agree with everyone that supports you and they are never going to agree 100 percent with what you stand for. But I stand for inclusion and that’s why I’m here and have been here every year and will always be here. When I’m mayor, I’ll be here every year.”

Borders added that Nunn and Long have no advisory role in the campaign, nor would they if voters elect her mayor.

“[Long’s] a contributor like thousands of other people and if he believes in 95 percent of what I believe in, I’m good with that,” Borders sad. 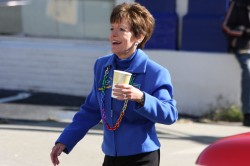 Norwood’s campaign manager, Roman Levit, said Friday that the donation from Bowers came after he attended a campaign fundraising event. But he added that LGBT voters should focus on Norwood’s full support of gay issues.

“People give money to all sorts of candidates for all sorts of reasons that go beyond one particular item on their agenda,” Levit said. “She supports full equal rights for the LGBT community. Mary supports marriage equality and she is one of two candidates that does. One of her family members is gay as well.”

Norwood (bottom photo) has been deflecting aggressive attacks from Borders, Reed and the state Democratic Party in the closing days of the campaign for her Republican past. At least two prominent gay Republicans are among several LGBT Atlantans who back her campaign, including Jamie Ensley and Mansell McCord. Ensley is the current president of Georgia Log Cabin Republicans, while McCord has led the group in the past.