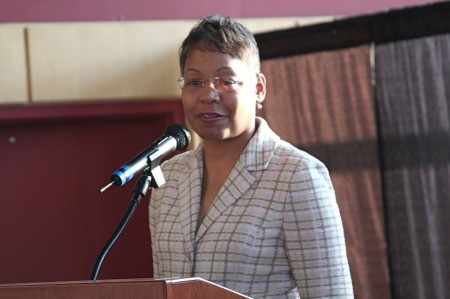 In a positive development for gay Atlantans, Lisa Borders has decided to jump into the mayor’s race — again.

Borders, once considered a front runner to replace term-limited Mayor Shirley Franklin, stepped out of the race in August citing family reasons. Last week, she stepped back in.

She’s quite possibly the most gay-friendly candidate in a pretty gay-friendly roster of people seeking to become the city’s next leader. She joins Council member Mary Norwood and state Sen. Kasim Reed in the race. More are sure to follow.

She discussed the motivation behind her gay creds in a Q&A with Southern Voice Friday, the first announced mayoral candidate to sit down with the gay newsweekly. Just to be clear, Borders offered up that she’s not a lesbian, though some supporters may think so.

“It’s not support that has just come over night. I have had many, many conversations, [attended many] events, policy discussions, with people in the gay community. So I’m not some Johnny-come-lately that just moves into the city. I’m not someone who is just pandering to the gay community. I have put my political capitol on the line and said, ‘This is important to me.’ Whether it’s participating in the gay Pride Parade that some folks are like, ‘I’m not sure I want to be that visible,’ I have been in every single one. I have walked every single step of the way. I’ve never taken a car, I’ve shook hands up and down the street, taken pictures with everyone, so I would say that the gay community has been very receptive of me, even though I happen not to be gay.

Someone figured that out recently and they asked me, ‘Why didn’t you tell us you weren’t gay,’ and so I asked them, ‘You never asked, is that a problem?’ and they said, ‘No, we just thought that you were gay,’ and so I told them that I’m not, but that’s OK.”

Reed has supported a gay- and transgender-inclusive hate crimes bill in the state legislature, though it has failed to become law.