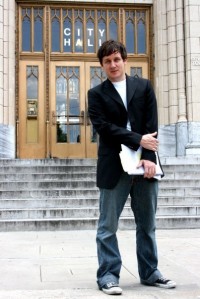 How exactly did Kyle Keyser (photo), the only gay man in Atlanta’s mayoral race, get the money to go from grassroots crime-fighting activist to full-fledged candidate in just two days? The short answer is hour by hour, moment by moment.

You probably already know that in an amazing 48-hour timespan, Keyser’s social media campaign raised enough interest and the necessary $4,425 from supporters to put his name on the ballot. But a behind-the-scenes look into his mindset, and each step of the “Dash for Cash” in Creative Loafing, is an inspiring must-read for gay Atlanta.

Among the article insights:

6 p.m.: Keyser speaks at another Kirkwood rally, this one organized by ATAC, in front of Vinocity.
“The Monday rally was what put me over. I sat on my pile of signs, cleaning up, and talked to people who attended the rally and lived in the neighborhood. I just felt compelled to do something. I examined the situation and looked at myself and was like, “What can I do to affect the most change?” It was really like a compulsion. I’m like, ‘I have to do something.’
Then I decided, ‘I’m gonna do it.'”

The ups and downs were daunting.

Wednesday, Sept. 2
10:52 a.m.: Facebook update: “[I’m] gonna run for Mayor. Read my letter. I think it’s time to let them know the residents of Atlanta are serious about change. So I’m in. I’ll need your help …”
“There had been this intense 24 hours of buildup, and then you press a button and put it out there and then there’s just … silence. I was like, ‘Alright, it’s out there. I really want to do this, so let’s see what happens.'”
12:33 p.m.: Facebook update with PayPal link attached: “Needs you to donate at least 10 … but maybe 20?”
1:05 p.m.: The first donation comes in, for $100.
Wednesday afternoon: Interviews with CL, the AJC, Southern Voice, Daily Kos and Project Q Atlanta.
Wednesday night: Keyser heads home and discusses strategy with campaign assistant Fiona Sites-Bowen.

Thursday, Sept. 3
1:47 a.m.: Facebook update: “Has Bon Jovi’s “Livin on a Prayer” preventing me from falling asleep. Telling …”
Lyrics from the chorus of “Livin’ on a Prayer”: “Oh, we’re halfway there.”
Thursday morning: Keyser emails targeted groups of contacts he’s worked with throughout the country.
11 a.m.: Interview with reporter from NPR at Outwrite bookstore.
12 p.m.: Lunch with a friend involved in politics at Nickiemoto’s.
“He said, ‘You need to get on the phone. It’s called dialing for dollars, Kyle. If you ask people for $10 directly, they’ll give it to you. Don’t think you can just pull this off on Facebook.'”

Since qualifying, Keyser has come out against APD actions in the Sept. 10 Atlanta Eagle bar raid, attended the rally protesting the raid, and was denied a spot on WSB’s live mayoral debate on crime, which is his key platform issue in his role as founder of Atlantans Together Against Crime. A second protest is scheduled for tomorrow.