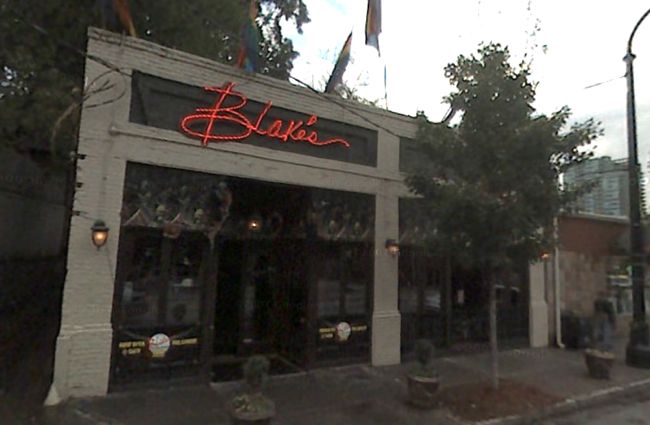 A gay boy and his pricey iPhone were soon parted after some grab ass during a recent Friday cocktailing trip through Blake's, though the bar disputes that it has a pickpocket problem.

A patron complained that during a May 10 stop at Blake's, a pickpocket swiped his iPhone 5 and phones from a handful of other customers at the bar. So he posted this warning to Reddit: If you go to Blake's in Midtown, guard your phone.

I just wanted to let people know to watch out if you go to that bar. I got pick pocketed and had my iPhone 5 stolen from me Friday night. Also, there were 5 other people (not exaggerating) outside who had the same thing happen. The police officer there did nothing and told us it happens every day there. So I figured I'd warn people to watch out because apparently having your phone in your pocket isn't enough.

Definitely got a nice welcome to Atlanta to find out that some people just take things out of someone else's pocket like it's nothing and no one does anything about it.

I still really like it here though and hope to be at a meetup next time there is one.

In subsequent comments, whatthecaptcha says the theft happened quickly, though a densitized booty helped the culprit with his caper.

I had mine in my back pocket which now I know apparently isn't okay. Had I known people did that I wouldn't have had it there but I've been going to bars/clubs in different major cities for years and never once had anyone try something like that.

There was another guy who had his in his front pocket though and they took it which I'm not sure how he didn't notice. Even I felt someone lightly brush my back pocket but it's a gay bar and someone had just grabbed my ass 10 min before that so I figured I'd just ignore it but when I checked for my phone 30 seconds later it wasn't there.

The Reddit hive offered all sorts of tips on protecting your expensive stuff -- and your junk -- in a gay bar. But Blake's was proactive, too, quickly apologizing to whatthecaptcha and making it clear that what he experienced isn't unique to their cozy space.

whatthecaptcha: I apologize for your last experience at Blake's On The Park, and while we (Blake's Management) are sympathetic to your unfortunate experience, please know that pick-pocketing is NOT unique to our establishment, and can and most certainly does occur at many other establishments city-wide.

As you know, we are a cozy space, so patrons brushing up against patrons to move throughout our space is common and necessary during peak hours. Thieves who are scouting and working a venue know this, and they know very well what to look for when profiling a potential victim - and they usually, brazenly, strike multiple times wherever they may be working. And so as others in this thread have advised, taking measures to keep your valuables closer to your person is an excellent idea for any occasion at any venue.

Also, within the last year, a member of our management was recognized for working with our hired Atlanta Police Department personnel to stop a male and female pair of thieves as they were caught attempting to lift another female patron's purse. Upon arrest and subsequent search of their car parked in our parking lot, they were discovered as having many stolen items from people they stole from at other establishments in Midtown; they are both in jail at this time. So we are aware of the persistent threat of such activity against our patrons, and we are as active as we can be in the pursuit and prosecution of it.

While I must stress that the onus is on us as city dwellers to take extra care in how we secure our belongings in public places, I hope that you will return to our establishment in the future knowing that we at Blake's On The Park have a great concern for our patrons' safety.

And then a little more back and forth.

I appreciate the response. I know stuff happens and I'm definitely not blaming the bar at all. Are there not cameras in the bar? I know before when I was there a year or so there was a drag show and it was playing on the screen so I figured there might be. The only person who's response I really had a problem with was the police officer at the door. I know if I were him and knew that stuff was happening all of the time I'd want to stop it.

I really do appreciate the response though. I'll be back there sometime soon I'm sure, I'll probably just leave my phone at home from now on when I go out once I get a new one hah

And some more from the bar.

Again, my apologies for your situation. We look forward to having you join us again, and I assure you your experience will be much much better.

But really, petty thieves shouldn't mess with queens from Blake's. They fight back.