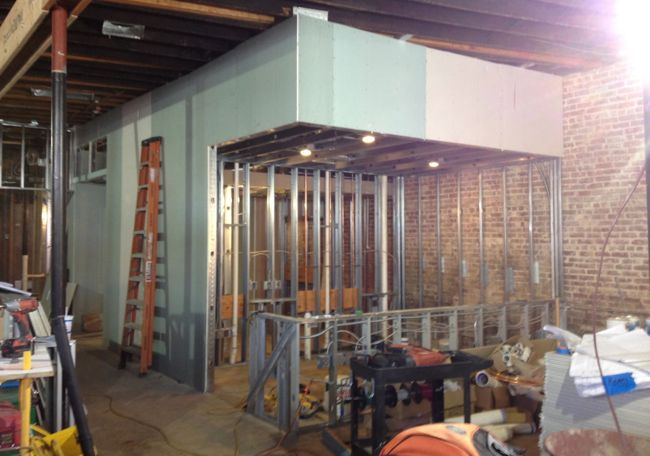 The race to stuff your gay face full of tasty food, get you drunk on tasty wine and give Blake’s a run for its late-night money continues at the corner of 10th and Piedmont. Which new restaurant will open its doors first? The answer to that tasty question remains up in the air. In the meantime, it sure is fun to watch as it unfolds from opposing corners in Midtown. Whether it’s Ten refashioning the 5 Napkin Burger space or the Gilbert’s expansion to rework the former Outwrite Bookstore into 10th & Piedmont, the competition is on to see which one opens its doors first. Either way, gay foodies (and drunks) win. So, how are the renovation plans shaping up? Ten, the work of Gravity owner James Nelson, is putting $48,000 into the nearly pristine guts of the former 5 Napkin to remodel its bathroom, add new lights and renovate the bar. As What Now Atlanta points out, what more do you need in a space that 5 Napkin poured $1.5 million into for its buildout?

Sounds cheap for a new a restaurant concept, but who can blame Ten? The space is beautiful as is (and it should be, considering 5 Napkin spent $1.5 million on it’s buildout). According to a building permit application Ten submitted to City of Atlanta [in November], the nearly $48K will be spent to remodel the restaurant’s bathroom, install new lighting and renovate its bar.

Ten opened briefly in October to tease Pride-goers and participants in AIDS Walk Atlanta. But there’s no word on when they’ll kick open the doors for good. Once they do, say hello to a smoke-free place that offers up an All-American menu during the day and goes for a bar feel for late-night. 10th & Piedmont keeps teasing its Facebook fans with photos of the renovation, color samples for furniture and mouth-watering descriptions of its menu items. They’ll go with a bar feel late at night, too. The restaurant has already offered plans showing the exterior of the refashioned building to mixed reviews. But when? 10th & Piedmont says only this: Sometime in December.

We are bringing more fun and delicious fare to their Midtown neighborhood with the December opening of 10th & Piedmont in the former Outwrite Bookstore & Coffehouse space. Guests can enter the restaurant and lounge from inside Gilbert’s Café & Bar or use the entrance located at the Piedmont Road intersection. Serving seasonally inspired dishes, creatively portioned into small bites for easy sharing, 10th & Piedmont’s Executive Chef Brett Ring will use multi-cultural flavors and organic ingredients to execute global cuisine with a regional, Southern influence.