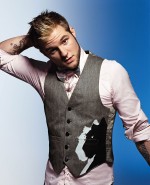 “American Idol” contestant Blake Lewis will headline the Atlanta Pride Festival this fall, putting in place a final piece of the entertainment lineup for the three-day event.

Lewis, who took runner-up in Season 6 of the show, is scheduled to perform on Sunday, Nov. 1 at 5:50 p.m. His performance comes just before the highly-popular Starlight Cabaret, which is set for 7 p.m.

“We think Blake’s diverse fan base will draw some new people to the park on Sunday,” J. Sheffield, Atlanta Pride event manager, says in a press release. “In addition to Blake, our Entertainment Committee, in close collaboration with Q&A Entertainment, reviewed hundreds of applicants to select a lineup that we’re really proud of.”

On Monday, Pride organizers announced that Doubting Thomas, an indie-rock group from Charlotte, would appear during the event. Earlier this month, other performers were announced including Josh Zuckerman, Eric Himan & The Adams, Halcyon and Goddess & She.