The Atlanta Lesbian Health Initiative and a collection of groups that work with African-American lesbians need some studs – even some bois – as part of an emerging effort to craft healthcare programs that reach out to masculine-identified woman.

To kick off the effort, called the Stud Health Project, ALHI is partnering with the Center for Black Women’s Wellness, Vision Church, Sigma Omega Phi Fraternity and Agenda Benda Justice to host Social Stimulation on Saturday, March 26. The spoken-word event is the first in a planned series to recruit African-American women as part of focus groups. Insights gleaned from those groups will help ALHI and its partners in crafting outreach efforts about breast and cervical health tailored to black lesbians who identify as masculine, an effort funded by grants from Emory University and Morehouse School of Medicine. 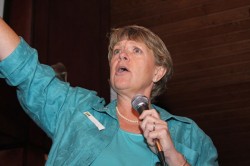 “We’ve known experientially, and research confirms, that any of us is more likely to heed health messages in which we can see ourselves,” says Linda Ellis (photo), ALHI’s executive director.

“Saturday’s event kicks off our recruitment for a series of focus groups that will be capturing the healthcare experiences and attitudes of studs, and separately, their often times more feminine partners. Our plan is to use the information collected through the focus groups to craft messages and or support programs that are more responsive to studs,” she adds.

Masculine-identified lesbian women of color may not utilize healthcare organizations that don’t speak directly to them for fear of rejection, being misunderstood or insensitivity, says Cole Thomas, who is working with ALHI on the Stud Health Project.

“ALHI wants African-American, masculine-identified women to be more engaged with the services it offers and brokers, and we need to embrace those opportunities while teaching cross-cultural sensitivity,” Thomas says.

ALHI and its partners are working with an Emory researcher to take the feedback from the focus groups this spring to later craft some stud-specific programming, Ellis says. But already, they’ve worked with the Center for Blacks Women’s Wellness, a longtime ALHI partner, to add supportive care for masculine-identified women who are referred to its clinic for healthcare.

“If we can get more studs to access healthcare screenings, we need to make sure that the providers they see are going to be comfortable with an individual who ‘looks male’ requesting a breast or gynecological exam,” Ellis says.

Thomas says the effort being launched on Saturday is the first step in a lengthy process.

“I believe outreach will need to be long-standing, gentle and consistent to make a lasting impact. Building trust is a process and not an event. African American lesbians must also build trust amongst ourselves in order to effectively organize,” she says.

For more information about the Stud Health Project, attend Social Stimulation on Saturday, March 26 at the Rush Center, or {encode=”[email protected]” title=”email”} or call ALHI at 404-688-2524.