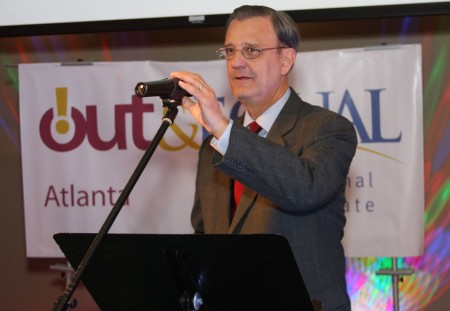 A new coalition of black gay activists on Friday endorsed Jim Martin, the gay-friendly Democrat locked in a runoff for a U.S. Senate seat from Georgia.

“The Atlanta Black LGBT Coalition believes that President-elect Barak Obama brings a new leadership to America and that Jim Martin can bring a new kind of leadership to Georgia,” says Rev. Dr. Kathi Martin, a founding member of the coalition. “We are working hard to decrease violence against women, to ensure that everyone has affordable housing, living wages and of course ending the senseless war in Iraq. We need a progressive partner in Washington.”

Martin faces U.S. Sen. Saxby Chambliss, a Republican, in a Dec. 2 runoff. The race, one of only two undecided campaigns for the Senate, could help provide a filibuster-proof majority for Democrats. It’s attracted big names to Georgia on both sides of the campaign, including former President Bill Clinton on Wednesday and former Vice President Al Gore this Sunday — both for Martin.

Martin has attracted considerable support from gay Atlantans through the National Stonewall Democrats and LGBT Georgians for Jim Martin. He has stumped at gay events, including the launch of Out & Equal’s Atlanta affiliate on Thursday (photo), and benefitted from fundraisers held by gay and lesbian Atlantans.

Gay issues, though, have not surfaced much in the campaign. Chambliss has taken to rallying against “activist judges,” often code words for opposing gay rights, according to Southern Voice. But Martin, too, has shied away from making gay issues a significant part of his campaign.

Both candidates do not support gay marriage, but Martin supports most other major gay issues, including civil unions, and is is credited with stopping anti-gay legislation when he chaired the Judiciary Committee in the state House. He also drew praise from HIV activists and gay groups during his tenure at the helm of the state Department of Human Resources.

Chambliss received a score of 20 (out of a possible 100) on a recent scorecard from the Human Rights Campaign that tracks support of gay and lesbian issues in Congress.

Chambliss enjoys a slight lead in the race, according to a trio of polls analyzed by the Atlanta Journal-Constitution.

“Jim Martin has promised to continue his fight in Washington for social change by supporting programs that provide job training and placement services for at-risk youth, increasing federal funds to expand state services to include the working poor and providing tax incentives to businesses that hire welfare recipients,” Martin says.