Burger King’s got a new Flame for you 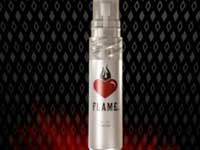 The home of the Whopper has just the thing — a new men’s body spray for $3.99 that brings you “the scent of seduction with a hint of flame-broiled meat.” This spray isn’t for twinks.

Burger King is marketing the product through a Web site featuring a photo of its King character reclining fireside and naked but for an animal fur strategically placed to not offend.

The marketing ploy is the latest in a string of viral ad campaigns by the company. Burger King is also in the midst of its Whopper Virgins campaign that features an taste test with fast-food “virgins” pitting the Whopper against McDonald’s Corp.’s Big Mac.

The site proclaims to prospective buyers: “The Whopper sandwich is America’s favourite burger,” before going on to extol the virtues of a perfume that smells like cooked meat.

“Flame by BK captures the essence of that love and gives it to you. Behold… now you can set the mood for whatever you’re in the mood for.”

So, get going and grab the latest ‘macho’ thing in the market to be the ‘yummy’ irresistible man.