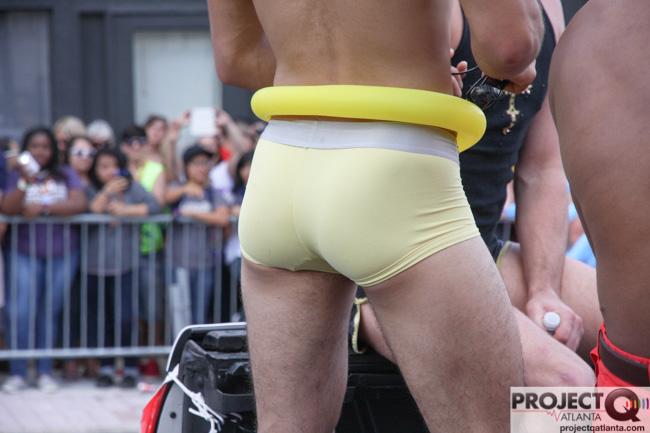 Gay Atlanta go-go boy bar BJ Roosters says it didn't fire a dancer over a federal lawsuit he joined and would rehire him if he completes some basic employment paperwork.

The response from the bar's attorney, Larry Stine, was sent Friday to Anthony Collins, an attorney representing at least 10 dancers suing the venue. On Wednesday, Collins filed a request for an emergency motion seeking a temporary injunction against the bar and an order forcing it to reinstate Jeremy Sheffield, a dancer at the club since 2009.

The motion says BJ Roosters fired Sheffield earlier this month when he refused to sign a document agreeing that he would not sue BJ Roosters and would settle any legal claims in arbitration. A day after Sheffield claims he was fired, he joined about 10 other dancers suing the club in federal court, demanding that they be treated as employees and not independent contractors and paid minimum wage. The lawsuit demands up to three years of back pay and an end to house fees and other fines the dancers are required to pay.

But Stine fired back on Friday, calling the confusion over Sheffield's employment status a “misunderstanding.” In the wake of the lawsuit, the bar reclassified its dancers as employees and they need to fill out appropriate paperwork, he says.

“First, Defendants have not terminated Jeremy D. Sheffield. If he will complete the employment papers, excluding the Dispute Resolution, document and provide the necessary documentation for the I-9 form and provide a valid Social Security number, he will be employed as a tipped employee working his normal Wednesday and Saturday schedule,” Stine states in the letter.

“We dispute many of the factual allegations made in your motion; however, the purpose of this letter is to rebut the most critical errors — that Defendants terminated Mr. Sheffield and that it plans to use the Dispute Resolution related to this case or to use it retroactively. Since the critical facts cited in your motion are not correct, I would request that you withdraw the Emergency Motion,” Stine writes.

The motion states that Sheffield's work at BJ Roosters is his sole source of income and that the alleged termination “will soon cause him enormous financial hardship, including rendering him unable to make child support payments.”

Stine states that current employees were asked to sign an arbitration agreement that, going forward, addresses their employment status. But that's not intended to force dancers into arbitration for the pending lawsuit, Stine writes.

“In light of the allegations made in your Complaint, Defendants decided to employ the dancers rather than fight the issue as to the future. I understand your argument that the dancers were legally employees under the [Fair Labor Standards Act]; however, it is undisputed that they have treated as independent contractors and it is our position that they were not employees of Defendants,” Stine states.

A hearing is scheduled for Feb. 20.

The lawsuit is one of several filed in November against bars and clubs in metro Atlanta. More than two-dozen former and current dancers also sued Swinging Richards, arguing  that the club violates federal law by not paying them minimum wage and charging them various fees to perform.