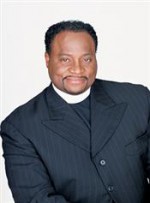 The anti-gay Atlanta bishop and head of New Birth Missionary Church attracts tens of thousands of people to his Easter services at the Georgia Dome each year. But not today.

The mega-church dropped the Georgia Dome this year, instead holding services at its 10,000 sanctuary in Lithonia. It seems membership in the church has dropped by 20 percent and Bishop’s prosperity preaching isn’t received so well when his followers are losing their jobs and homes.

Bishop Long, who routinely preaches his sermons dressed in expensive tailored suits and dripping in diamonds, acknowledges that his members are no longer receptive to his “prosperity” message since many of them have lost their jobs and homes.

“In this time of recession, we had to look at some different ways of doing things,” Long said. “The unemployment situation, the mortgage situation has definitely affected our members. This money could be better utilized to bless more people, feed more people.”

Bishop Long is known around Atlanta for his extravagant lifestyle, driving expensive cars and wearing flashy clothes. But despite the recent decline in tithing and offerings, Bishop Long pledged to continue charitable services such as a blood drive, health screenings, a clothing drive, haircuts, dinner for the needy and job assistance.

In 2004, Long led a march against same-sex marriage through the streets of downtown Atlanta. In 2007, Soulforce — a national non-profit organization dedicated to eliminating anti-gay rhetoric in all religions — targeted Long and other anti-gay mega-church leaders for discussions about their rhetoric.

It’s unfortunate that Long’s harmful anti-gay rhetoric isn’t leading to the church’s drop in membership. But at least it’s not on display at the Georgia Dome for all to watch this Easter.