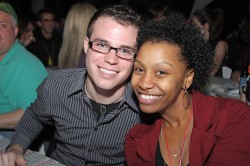 When the lights go out at a gay bar in Atlanta, the results aren’t always good. Just ask the boys at the Eagle. But that wasn’t the case on Wednesday with bingo at Jungle.

That evening, the lights were dimmed on purpose. It was, after all, Lights Out Bingo and it was the monthly installment of the fundraiser for Pets Are Loving Support.

It’s been a busy month for the non-profit, as it wasn’t long ago that they were rubbing elbows with Fred Schneider, the gay frontman for the B-52’s, country crooner Ryder Lee and lesbian DJ Vicki Powell for Spring Thang. The event on March 5 raised some $17,000 for PALS and the Georgia Music Hall of Fame.

Up next for PALS: F.A.G.S. Prom Night Bingo on April 14. Before you get all politically correct, keep in mind this event is a combination of their Trailer Park Bingo and Alabama Prom Night Bingo, but this time includes Florida, Alabama, Georgia and South Carolina. Get it? F.A.G.S.