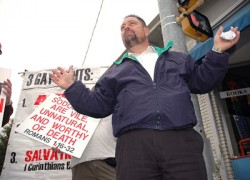 Billy Ball is quite possibly the only guy in Midtown that can’t get laid during Pride. The irony is that if he did, the angry street preacher might not be such a douche bag.

He’s the pastor of Newnan’s Faith Baptist Church and once a year, he drives north to Midtown to hurl anti-gay slurs during the Atlanta Pride Festival. He’s uptight and takes offense when the gay boys respond with their own theories that his anti-gay stench is fueled by his repressed homosexuality. Maybe a little sodomy might loosen you up, Billy.

Nevertheless, Bell’s failure to get across his sales pitch — that our three options are hell, AIDS or salvation — and his Fred Phelps-like tactics earned him the No. 2 spot on Creative Loafing’s list of the “11 Least Influential” people in Atlanta. Even gay PR flak Jonathan Jaxson isn’t that much of a douche. Jaxson scored the No. 10 spot.

He says he only does what he does because he cares about people’s souls.

“I’ve got a pretty wife at home, four children, 16 grandchildren who tell me they love me,” he says. “I’d much rather be with them, or out hunting a deer and boar.”

Thanks for pointing out you’ve got a “pretty wife,” as if that boosts your hetero creds and makes you more of a savior. Frankly, we’ve had enough of protesters at Pride. But, sadly, one seems to come with the other.