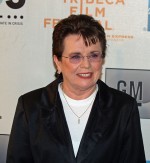 Lesbian tennis legend Billie Jean King was the guest of honor for the International Tennis Hall of Fame’s Legends Ball last Friday, there to accept the 2008 Eugene L. Scott Award. Upon spotting her, the Daily Transom attempted to steer the conversation to the 2008 election.

But would the Governor of Alaska have been so quick to release public statements about her family if her daughter Bristol was revealed to be gay, instead of pregnant? “That was one question I had in my mind,” said Ms. King, who was first prominent professional female athlete to come out. “I have no idea. Her, I think she’d embrace the child and then have to start thinking about the issue.”

Read the full story from the New York Observer.