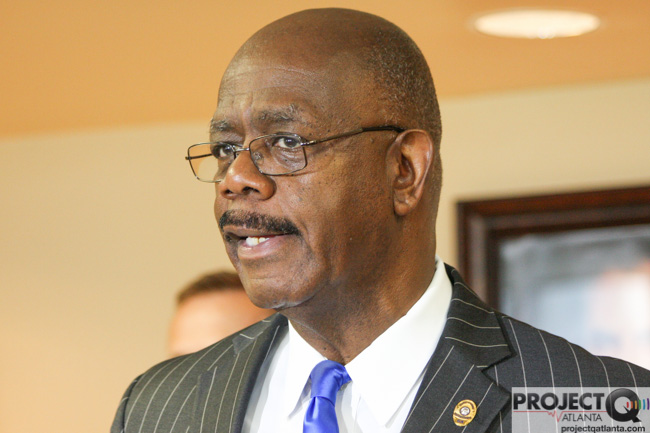 Nearly a dozen victims of gay Atlanta art dealer Bill Lowe will soon receive $256,514 in restitution for the proceeds he stole from them after selling their artwork and refusing to pay them.

Fulton District Attorney Paul Howard (top photo) condemned Lowe during a press conference Thursday for living a lavish lifestyle on the money he received from selling the artwork of others without paying them.

“He was a very powerful person in the arts community. The artists looked to him to be able to provide for their own lives and their own livelihoods. He took advantage of it,” Howard said.

“We are hoping now that people are on notice regarding what he has done and that it will force a transformation in the way that he handles his business,” Howard added.

Howard also announced that Lowe has fully paid the $256,514.92 in restitution ordered as part of his plea agreement in April. That money will now be turned over to 11 artists at the center of the criminal case lodged against Lowe beginning in September 2015.

“We were not 100 percent satisfied but we have come so much further than we had been before. What has driven us in this case is to make sure that at least our 11 named victims were satisfied.,” Howard said.

Lowe, 64, faced up to 40 years in prison and a $1.2 million fine on three charges – one count of violating the state's Racketeer Influenced & Corrupt Organizations Act and two counts of theft by conversion. The charges stemmed from a criminal case in which prosecutors said Lowe repeatedly withheld payments to artists over a nearly 14-year period, from November 2001 through September 2015.

On April 18, a combative Lowe pleaded guilty to a single count of theft by conversion during an hours long and contentious court hearing. Lowe entered an Alford plea, which allows a person to plead guilty but not admit to the criminal act while agreeing that the evidence is enough to convince a jury of guilt beyond a reasonable doubt. As part of the plea he negotiated with Fulton prosecutors, Lowe was sentenced as s first offender to 10 years probation and ordered to pay restitution to the 11 victims.

During the April hearing, Lowe had an attorney read a three-sentence statement (third photo) in which he took responsibility for taking the money from the artists.

“Mr. Lowe took responsibility for his actions. Many of the artists had been chasing him down for years. As the police department will tell you, they sent emails, personal visits, phone calls trying to get him to admit that what he had done was illegal. And on April 18 he did that,” Howard said.

Lowe used the money due to artists to pay personal expenses, including his mortgage, Howard said. 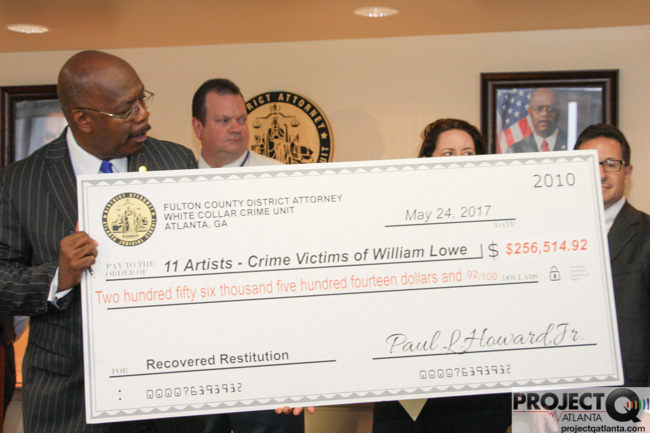 'Justice was finally brought to bear'

Howard and attorneys for the victims in the case accused Lowe of defrauding more than just the 11 artists in the criminal case.

“Bill Lowe has been taking money from artists for years,” said Kevin Bahr, an attorney who represented one of the victims.

“Justice was finally brought to bear on him. If he takes money from artists ever again, he will go to prison. So the arts community can be thankful that this example is useful not just for Bill Lowe but for every art gallery in the State of Georgia who needs to do the right thing and honor the commitment that they make with their artists,” he added.

Patricia Roy, an attorney for two of the victims, said she interviewed artists from as far back as 1985 who claimed that Lowe stole sales proceeds from them.

“Pennies on the dollar so many of these arts victims received or many of them just gave up. So we are truly grateful for the District Attorney's office for what they've done,” she added.

As part of his plea agreement, Lowe was also ordered to return 39 pieces of art to their creators and perform 750 hours of community service. Lowe must also seek approval from his probation officer for travel outside Georgia. 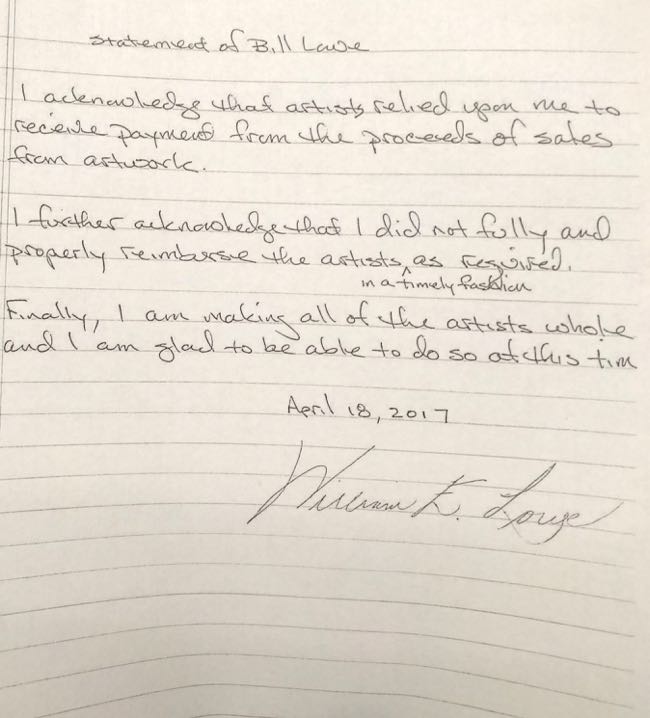