Biker Chicks: Hit the road with Atlanta’s Dykes on Bikes 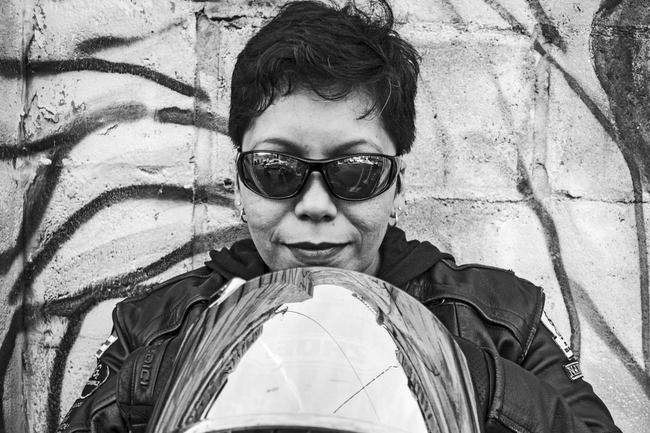 They have a reserved spot at the front of each Atlanta Pride parade, but the badasses of Dykes on Bikes are so much more. They're social justice warriors. They're comrades.

What started in 1976 at San Francisco Pride became a trademarked name in 2006 after a long legal battle over the word ‘dyke,’ says Amy Ferzoco, president of the Atlanta chapter.

As local president the last few years, Ferzoco has focused on breaking “bull dyke” stereotypes and “making the group accessible to all queer women while maintaining and celebrating the iconic legacy of rad dykes on motorbikes leading Pride,” she says.

The group is most widely known for being first each year in the Atlanta Pride Parade, and as of last year, Pride's Saturday Dyke March. Beyond the festival, they fill their calendars with rides and socials around the region and beyond.

But don't take just our word for it. Let our photo essay, and Ferzoco’s full interview, enlighten you on their mission, and welcome you into the world of these fascinating local queers. Appearing after her interview, each member gives us their take on being part of the crew. Their answers appear alongside their portraits in Q magazine's second installment of James L. Hicks’ photo series on LGBTQ Atlanta groups.

If someone had never heard of y’all, what is Dykes on Bikes?

Dykes on Bikes’® mission is to support philanthropic endeavors in the LGBTQ and women's communities, and to empower a community of diverse women through rides, charity and Pride events, and education. We refuse to conform to gender roles, we aim to ravage patriarchy, serve to remind people that it was women and drag queens who led the Stonewall riots, and make it known that our feminist butch roots in WWII mirror the gay mens leather roots.

What are your some of your goals as local president?

Inter-sectionalism is a serious focus for us, so in 2017 we rode with our own flag bearers, who flew their freak flags high and proud: bi, pan, trans, women of color, polyamorous, kinky. They are magnificent women, and are deeply, deeply reflective of how we see our community. Many of these women had never been to pride before, let alone led it with Dykes on Bikes®, and it's an exceptional privilege to have crafted that experience with them – I get emotional over this because I am in love with their beauty, bravery, and their pride. They’re all joining us again in 2018.

What are some of your year-round activities?

When the weather is good we hold meetups and rides. We do brunches, lunches, and dinners; and we like to hit Decatur Bike Night.

We have also become a sort of Southern traveling Dykes on Bikes. In 2016, we did Augusta Pride. In 2017, we rode to DC for Capital Pride and the Equality March. This year, we are looking at Chattanooga in support the Tennessee Valley Pride since they have a one-woman women’s motorcycle contingent.

We have two criteria for members, the first being that members must have a motorbike. It doesn’t matter what you ride, it matters THAT you ride; I’m the President and lead on my scooter.

Second, a lot of people think we are only open to the traditional image or stereotype of “dyke”, but we are open to any woman, any bike, and that manifests in a magnificent group of queer-centric women. We have lesbians, dykes, bisexuals, queers, femmes, butches, kinky, poly, pan, trans, gender fluid people, straight allies, and so on – we have all the letters.

Anything else you want to say to queer Atlanta?

Are we hot women riding motorbikes? Yes. Are we kind of like the bouncers of Pride? Yes.

More importantly, Dykes on Bikes spans generations and identities, so we have this unique outlook on what it has been like to be a queer woman in the past, what it is like now, and what it can become as we progress as a society.

I encourage any babe with a bike reading this to join us – especially for the Pride experience. Watching the parade is one thing and marching in it is another, but leading it with these women is next level in terms of the pride and energy exchange with the crowds when we’re stopping for selfies, doing call and response chants – oh the big cheers when we drown out protestors with our engines.

Riders who want to join can find us on Facebook. Be sure to answer the security questions!

“I always loved the idea of riding with a group of strong, motivated women that embraces their sexuality like me.”

“I ride with Dykes on Bikes, because of their Pride, diversity, strength, and presence in our LGBTQA community.”

“I ride for ‘wind therapy,’ and who better to ride with than sisters who know and love you for who you are!”

“I ride because I’m so fucking proud to be a lesbian and love being on two wheels surrounded by other queer women!”

“Once I looked beyond the macho-stereotype, I found a group of beautiful neighbors, proud of their lifestyles and eager for the open road; I found myself.”

“I enjoy riding with a women’s group that is all-inclusive and a no judgment zone. You show up as you are and ride.” (Marilyn also appears at the top of this article.)