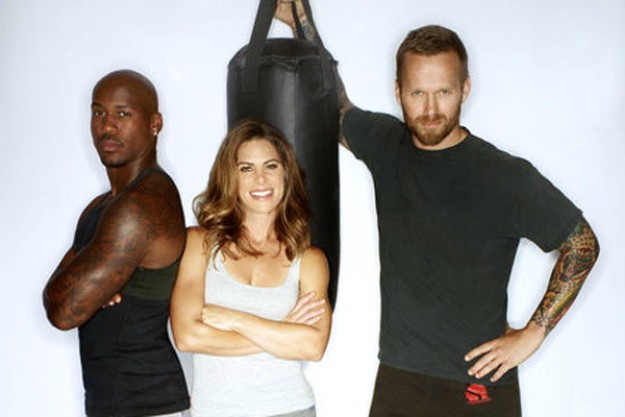 A lot has happened in the two years since Jillian Michaels told Ladies Home Journal she could fall in love with a woman and we ran down the gay rumors on her costar Bob Harper. Now her “Biggest Loser” 14 return finds the new mom talking more freely about her partner, her kids and going to see Madonna with Bob.

While fans waited with baited breath for Bob’s (top photo, right) big reveal – and even hold out gay hope for the show’s newest (and Atlanta’s own) hot-bodied trainer Dolvett Quince (top photo, left) – Michaels (center) acknowledged her love for longtime partner Heidi Rhoades last May when the two simultaneously announced the adoption of a 2-year-old Haitian girl and Rhoades gave birth to a son back in May. 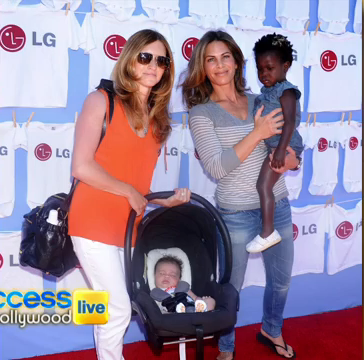 “I’m not the panicky mom. I’m the mom who’s always like ‘Babe, relax. Everything’s going to be fine,'” she tells the show. “But there are some instances where I’m not quite so sure and I can definitely be like Defcon 4, kind of orange-ish when the baby’s sick.”

NBC and “The Biggest Loser” play up the hard-ass with a heart’s role as “a new mom” since childhood obesity is a focus of the new season. But they don’t mention the circumstances of that newfound motherhood, her partner and much less the gender of that partner. It’s a line they’ve toed for a long time.

Not that the show is completely ignoring the gay this season. He’s not quite accurately been dubbed the show’s “first openly gay contestant,” but this season’s Jackson Carter (bottom photo) is definitely the first to talk about it at length. 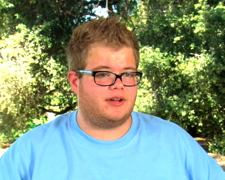 The 21-year-old partially blames his weight gain to being harassed after coming out as a teen and talks freely about his work with OutReach, a program in his native Utah that helps LGBT teens fight bullying. For “The Biggest Loser,” for anyone to utter the word “gay,” much less twice in two episodes, is a big step.

Will Harper ever come out publicly? At this point, does he really need to? The fact remains that despite internet comments claiming he was never closeted and spotting him with guy pals at guy places all the way back to his time in Nashville, Harper himself has never said the words. In your own time, sweet hot man. In your own time.

Meanwhile, we’ll ogle Quince and peek into his Roswell Road fitness studio, and hope for a Harper revelation. Not that there’s much question on the latter. Here’s Michaels’ Harper and Madonna analogy on why she’s returning to the show this season:

“People will support you doing new things, but they still want to see you doing that thing that you’re known for,” Michaels says. “I went to see Madonna recently, and I was like ‘Great, yes, play all the new stuff,’ and Bob’s sitting next to me and he goes, ‘Girl, when are they going to play ‘Holiday?’ and I was like ‘I don’t know. Play ‘Holiday!’ so [“Biggest Loser”] is kind of like my version of ‘Holiday.’ People love it and want to see me in this role, and as long as I can do that and have my business and have my family then it’s all good.”

Girl, we hear ya. And we’ll be watching.