Porn-stache enthusiast and “Biggest Loser” trainer Bob Harper ended years of guessing, opened up his heart and came out as gay in a prime time sort of way during a touching Thanksgiving episode.

It wasn't exactly a surprise. He's got queer abs after all. But even through 13 seasons and six episodes of the 14th, Harper never directly addressed what many fans assumed. Until Tuesday.

Harper's comments came as he reached out to Bobby, one of his blue team members who is  struggling with being gay. “Biggest Loser” touched on Bobby's sexual orientation earlier this season, but dove in head first on Tuesday as Bobby confronted his feelings about not coming out to his religious father.

“I haven't talked about my sexuality on the show — ever,” Harper says. “Now meeting Bobby, I really do believe this is the right time. I want to show Bobby that he doesn't have to live in shame.”

“Biggest Loser” went deep on gay issues last season when it found a new role model in contestant Jackson Carter. Add that to a pink portfolio that already included lesbian trainer Jillian Michaels coming out as gay and then, earlier this year, as a parent. And now, Harper as a sexy, tatted and talented trainer who is gay. Will former Atlanta guy Dolvett Quince join the big gay party? For now, we're left to lusting after him. 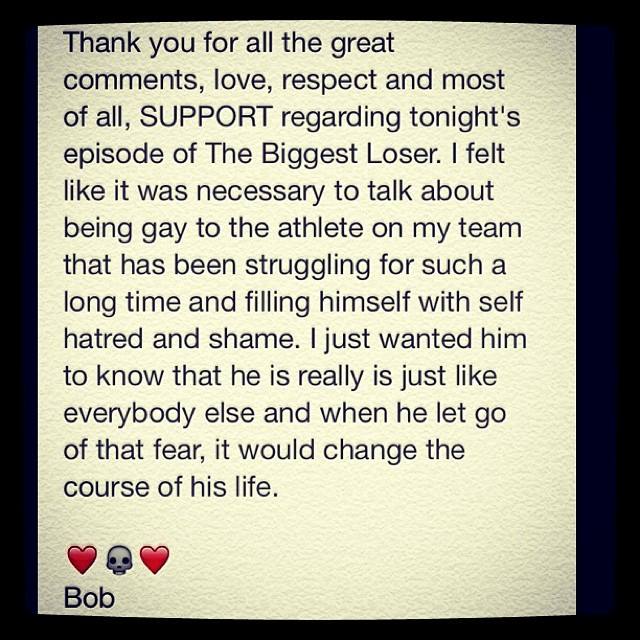