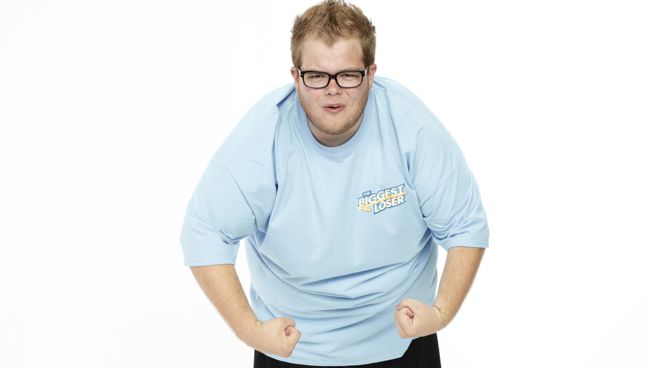 Who knew that an overweight gay youth from Utah would become a reality show role model? Not Jackson Carter, who has injected humor and a dose of sass as the first openly gay contestant on “The Biggest Loser.”

Not that the 21-year-old college student is without company on the hit NBC show. There’s lesbian mom Jillian Michaels and Bob Harper and his queer abs. And he’s struck up a bromance with sexy, muscled Dolvett Quince, the Atlanta trainer added to the crew for Season 14. But not many years beyond being bullied for his weight and for his sexual orientation, Carter didn’t expect to become an inspiration through his journey on “Biggest Loser.”

Yet that’s exactly what happened. As of the season’s ninth episode, Carter has dropped 78 pounds, talked freely about being gay and his work with the LGBT youth center OUTreach kids, and transformed his moments on the show into motivational television that’s part It Gets Better video and part workout program. Now, he’s harassed on the street not by bullies but people who stop to hug him.

“It’s easy to forget what we are doing while we are doing it,” Carter says in a recent telephone interview with Project Q Atlanta. “When you are in the gym bent over a puke bucket, you are just focusing on surviving. You forget that millions of people are watching it. I didn’t intend to be a big gay force in the media. Now that the show has been airing, tons of gay and trans people around the world are reaching out saying it’s good to have such a positive role model in the media.”

Carter was in the midst of a slump when casting for the show arrived in Salt Lake City. Without a roadmap to address his weight — which hit 328 pounds at the start of the show — and other problems, he auditioned and within a few months, he landed on the show and a course to change his life.

“I sort of didn’t realize how big of a following ‘Biggest Loser’ has. It is one of the biggest shows on primetime television and now I get stopped wherever I go. I’ll be out walking the dog and people will do U-turns to pull over and talk with me about it,” Carter says.

So we quizzed him on the show, those workouts, his time with the trainers and even a makeover by style guru Tim Gunn.

Gay boys don’t really puke at the gym, do they? 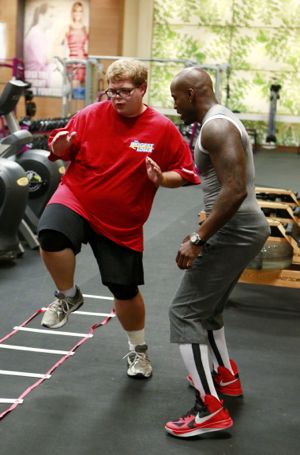 So far you’ve lost 78 pounds. Congratulations. But that puking in the work out room. Is it that tough?

When I first auditioned, I was like this won’t be a problem, this isn’t going to be a challenge for me. And then I got onto the Ranch on day one and realized how wrong I was. It was crazy hard. It’s really tougher than I thought. But I’m glad it was that tough and now I cherish it. I really have to focus on how hard I’ve worked to get to this point. Since I’ve worked for it and earned it, I’m not going to go back.”

You and Jillian exchanged some tense moments in the “Face Your Fears” episode. She was mad that you volunteered to leave the Ranch and live on your own for a week.

Jillian is very intense and very passionate about what she does. That is the nicest way of putting it. She just cares about everybody on the show and she just wants us to succeed. I had something to prove to myself and I needed to see. Like it or not, everyone has to leave the Ranch at some point. I wanted the challenge and she, in the heat of the moment, reacted to it and I said some things I’m not so proud of about Jillian. She was very, very intent on getting to the root of why I did it and I just really wanted the challenge.

Dish about the trainers. They are sexy. They are hard asses. And some of them are gay.

They are just very cool, genuine, nice people. I was very fortunate to get to work with all of them. On the Ranch, [being gay] was never really an issue or something we discussed. I got to meet Jillian’s kids. No one treated anyone differently because of sexuality. That was a concern for me going in. I have to live with these people for 11 weeks. But everyone was really cool — the show, the cast, the crew, the trainers. Sexuality was never a problem.

During an episode earlier in the season, there seemed to be the spark of a bromance between you and Dolvett.

Dolvett is my buddy. I love that guy and he got me through a lot of hard times and I was so fortunate to have him as my trainer. His motivational technique worked with me like no one’s business. … He never got frustrated with me. He got me through the Ranch and I will be grateful to him forever.

In the “Makeover” episode, you get the treatment from Tim Gunn and Ken Paves, making you the envy of gay men across the country.

Tim Gunn is the most incredible human being. I had only seen him on TV and thought he might be catty or mean. But he is the nicest guy I’ve ever meet in my entire life. He’s very genuine. He helped me pick out a wardrobe. Ken Paves is amazing, too. We went to the salon and I’ve never been anywhere so fancy anytime in my life.

You were bullied as a teen — for being a white kid on an Indian reservation, for being gay and for your weight. What happened?

My parents were very supportive and still are. My parents are the best in the world but they don’t necessarily have the best eating habits and I turned to food for comfort. I started gaining weight pretty heavily after I found that I could get comfort out of food and that carried on for the rest of my life. Anytime I was stressed or upset, that was just my relief.

Coming out is hard for everyone, no matter what age or location you are. It is not an easy process. Being 14 in conservative Davis County, Utah and realizing that I had feelings for this boy in my geography class — I was struggling with that.

Once I was able to recognize [that I was gay], I realized that I couldn’t go to school with those people anymore. They would be using gay slurs. So I transferred to an art school in Ogden. It was amazing and one of the best experiences of my life. I met people at a queer resource center and that had a positive impact on my life second only to “Biggest Loser.” Just to have a place so I could deal with my feelings. Having that safe place changed my life. If I didn’t have them, I might not be here today.

What would you tell gay fans of the show struggling with the same troubles you faced — bullying, finding comfort in food and coming out?

Every time we have a kid come into the center, I just tell them that you are unique. You have a place, you are loved and only do things that are going to make you happy.