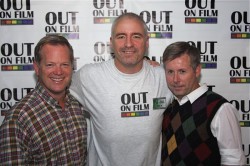 The event opened Friday, offering the local premiere of “You Should Meet My Son!” to kick off the biggest Out on Film yet. After the flick screened at Landmark Midtown Art Cinema, the evening shifted to Hotel Palomar for an afterparty. 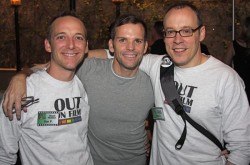 The screening also offered director Keith Hartman, a former Atlantan who was on hand for a Q&A and the afterparty. Former Atlantan Christopher Hines, who unveiled his “The Adonis Factor” on Sunday, also took in the outdoor party at Palomar.

“It’s not your imagination; the festival really is bigger this year,” Jim Farmer, the festival director, told Project Q Atlanta ahead of Opening Night. “To have something in addition to the screenings every single night was a big task, but definitely well worth it.”

Out on Film continues through Thursday. Read our daily previews of the event.