Big Peach gets rowdy on, off the field [photos] 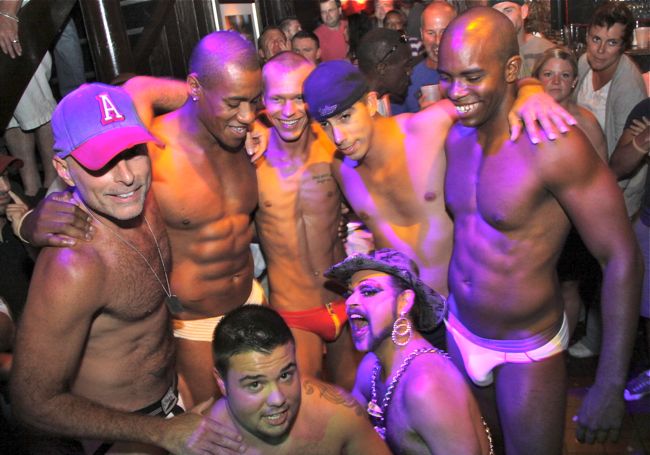 When hundreds of gay softball players from across the Southeast converge on Atlanta for the Big Peach Tournament each July, one thing always rings true: The off-the-field nightlife matches the intensity of the on-the-field competition.

That was the case again last weekend, as the three-day tournament from the Hotlanta Softball League opened Friday with a rowdy registration party at Burkhart’s that featured a Mr. and Miss Big Peach Contest. Think well-toned guys in skimpy swimsuits (or less) parading through the bar for the mister portion; drag queens of all shapes and sizes for the miss piece.

The underwear contest of the 2010 tournament proved to be the biggest – by several measures – registration party, but Friday’s take proved to be more intimate (top, third, sixth photos). Moving the event to Burkhart’s meant no more big stage, prompting the contestants to push through the crowd surrounding the dance floor. That’s one way to get some hands-on judging.

The tournament dished out more than $1,000 in cash and prizes during the contest.

The action on the field was just as enjoyable. Some 41 teams – a mix of local ones from HSL and others from Florida, Tennessee, Alabama and even squads from Boston and New York – took to Southside Park for games on Saturday and Sunday.

“We had 10 teams on the waiting list this year and wish we just had more fields to play on,” says Kyle Miller, the Big Peach director. “In year’s past, we have found players like to play in the same complex. We are looking at expanding the tournament to other field locations to allow for additional teams. We have so much interest for our tournament because everyone loves this great city.”

In 2010, the Atlanta Crew took first place in the top B Division; local teams didn’t fare so well last weekend, as no Atlanta team took one of the top nine spots across three divisions.

“Teams pay good money to come to Atlanta and this is always known as a pretty competitive tournament,” Miller says.