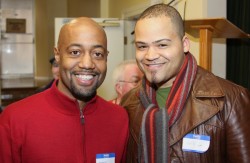 A packed crowd spent Monday morning reflecting on resilience, equality and the struggle for civil rights during the 10th Annual Bayard Rustin/Audre Lorde Breakfast in Midtown.

For the second consecutive year, the LGBT event filled the social hall at Saint Mark United Methodist Church. It’s a testament to the breakfast’s growth over the last few years and a reflection of the inclusive approach of organizers of the larger Martin Luther King Jr. Holiday celebration, according to longtime HIV and gay activist Craig Washington. 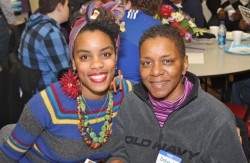 “In this culture of convenience, where so many of us are connecting by Facebook and text, we’ve become used to this sort of fast food kind of intimacy,” said Washington (top photo left), one of the founders of the breakfast, which this year carried the theme “Resilience.”

“So we want to make sure we made the time and set the table for people to really connect live and have those discussion so we can be nourished not only by the food for our bodies, but by the smiles and the words of encouragement and the love that we share in this space together,” he added. 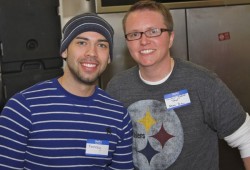 Washington and Darlene Hudson helped organize the event in 2002 when they worked together at the now-defunct Atlanta Gay & Lesbian Center as a way to provide an LGBT-friendly gathering before the city’s annual MLK march. The breakfast also calls attention to the contributions of Bayard Rustin—a gay man, civil rights activist and top lieutenant to King—and lesbian poet, author and activist Audre Lorde.

Last year, about 200 people attended the event, which included a panel discussion among LGBT organizers about black gay and lesbian groups in the 1980s and 1990s.