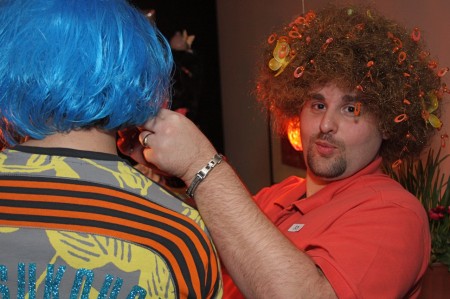 Finding a room full of big haired people in the Deep South isn’t all that difficult. The Atlanta Gay Men’s Chorus, sensing they might be onto something, crafted a fundraiser around the Southern stereotype and not surprisingly, found success.

The Big Wig Party unfolded on Saturday in the 11th floor community room of Viewpoint, a sleek condominium tower that rose from the former site of the 24-hour gay dance club Backstreet on Peachtree Street in Midtown. The party was a first for the gay chorus, which has several other events in the coming weeks.

On March 28, the chorus hosts Carnivale Silent Auction & Art Show at Bart Webb Studios in Avondale Estates. The chorus is accepting donations for the auction.

Next month, the chorus opens a three-day run of its latest performance, “Shaken, Not Heard: Stories of Gay Men, Faith and Reconciliation” at Oakhurst Baptists Church in Decatur. The show explores the relationship between homosexuality and spirituality. Each 75-minute performance will be followed by a moderated panel discussion with church leaders and authors including Christian de la Huerta, Chris Glaser and Daniel Helminiak. The show runs April 24-26.