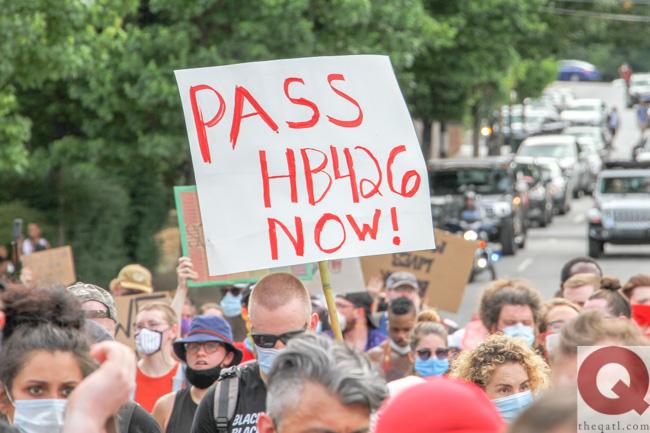 The biggest names in Atlanta’s corporate and sports worlds – from Atlanta United to Coca-Cola, Porsche and Delta Air Lines – called on Georgia lawmakers to pass a comprehensive hate crimes bill when they return to the State Capitol next week.

The 83 businesses, sports franchises, foundations, universities and law firms rallying behind hate crimes legislation adds to the growing chorus of support in recent weeks for the measure.

“We write to urge you to support, approve and sign into law a comprehensive, specific and clear bill against hate crimes,” the letter stated.

“We must all stand strong and united against targeted violence and bigotry. Diversity extends to a wide range of issues from race and ethnicity, to gender, sexual orientation, religion and physical ability, among other important characteristics that make each of us different but also deserving of protection from any attack that is motivated by hatred for the victim due to bias or prejudice,” the letter continued.

The publication of the letter – Let’s pass a hate crimes law in GA – was first reported by the AJC. The coalition also launched the website Pass Hate Crimes GA to lobby for the legislation and ask companies to sign on to the effort.

The companies said the economic future of the state depends on making Georgia a place where “diversity is celebrated and justice is assured.”

The state Senate Judiciary Committee is expected to consider a hate crimes measure when lawmakers reconvene their session next week. The state House passed H.B. 426 – sponsored by Republican state Rep. Chuck Efstration – in a 96 to 64 vote in March 2019. Then state Sen. Jesse Stone, chair of the Judiciary Committee, killed the LGBTQ-inclusive measure.

The bill would impose heightened penalties for crimes committed “because of the individual’s belief or perception” regarding the victim’s sexual orientation, gender, race, color, religion, national origin, mental disability or physical disability. It does not include gender identity as a protected class, but supporters of the bill said the inclusion of “belief or perception” would allow it to cover transgender people.

Calls for passage of the hate crimes law have increased since the killing of Ahmaud Arbery near Brunswick on Feb. 23. The Atlanta protests, ignited by the death of George Floyd at the hands of Minneapolis police on May 25, have also included support for the bill. On Sunday, participants in a march through Midtown supporting black transgender people also referenced the legislation (photo).

House Speaker David Ralston has repeatedly called on state senators to pass the bill. Lt. Gov. Geoff Duncan supports the bill but wants to see significant changes. Gov. Brian Kemp has expressed interest in the legislation but stopped short of endorsing it.

The full letter from Pass Hate Crimes Ga and list of signees as of June 8:

June 2020
‍
Dear Members of the General Assembly,
‍
We, the undersigned organizations, stand committed to building a better basis for peace and prosperity across our state and our country, founded on justice for all. We are all employers in Georgia who value diversity, fairness and inclusion.

Georgia businesses employ millions of citizens from all walks of life. They represent our state’s rich tapestry of diversity. Georgia is annually hailed as one of the “Best places to do business,” and in order to maintain that reputation, and encourage prospective companies to locate here and workers to live here, we must also be in the business of advancing policies that support the positive change and social impact our communities need in order to build a more just and inclusive world.
‍
As the General Assembly goes back into session, we write to urge you to support, approve and sign into law a comprehensive, specific and clear bill against hate crimes. We must all stand strong and united against targeted violence and bigotry. Diversity extends to a wide range of issues from race and ethnicity, to gender, sexual orientation, religion and physical ability, among other important characteristics that make each of us different but also deserving of protection from any attack that is motivated by hatred for the victim due to bias or prejudice.
‍
We must come together, engage in tough conversations, and find solutions to make our communities and our country a place of hope and not despair, where diversity is celebrated and justice is assured. Georgia’s economic future and the dignity of our citizens depend on it.
‍
We stand ready to provide you any assistance or support you may need to pass a hate crimes bill in Georgia and affirm that hate has no place in Georgia.