VIEW PHOTOS | Big Gay Supper Club @ Agave The Big Gay Supper Club returned to the gay social scene Tuesday, treating more than 50 diners to a four-course meal for the re-launch of the popular monthly event. The group noshed on homemade chips and salsa at Agave in Cabbagetown as they chatted, even enjoying shots of the restaurant’s Traditional Cuervo Margaritas. Then they dove into courses of enchiladas – from spicy beef to chicken – to cayenne fried chicken, shortribs and sautéed vegetables. For dessert, it was Belgian chocolate mousse with fresh strawberries. The evening marked a return for the Big Gay Supper Club, the creation of foodie Rande Head (top photo, right), who launched the concept in September 2002 as an alternative social outlet. After some time off, it re-emerged in May 2009 and entertained each month through last January. Now it’s back again, this time with Head and co-owner John Anderson (top photo, left). 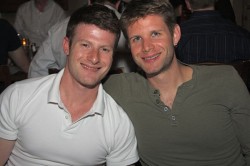 A little more about the group's mission from its website:

Within this idea, diners may make the night as lavish or refined as they wish. Our mission was originally to bring Atlanta’s GLBT community a new outlet of socializing outside clubs and bars. However we have since grown and evolved, including not only the GLBT community but also friends and supporters.Today, our guests may come to try out new restaurants or revisit an old favorite. Others use The Big Gay Supper Club to meet new people or connect with old friends and loved ones which they may not have seen amidst life’s hectic scheduling. Some come to utilize the varying and dynamic attendance as an invaluable networking tool. Whatever the instance, The Big Gay Supper Club has served thousands of attendees from all over Georgia and the nation.

The group hasn’t announced plans for November and December, but they hint that the holiday season might be best served by Big Gay Saturday Brunches.