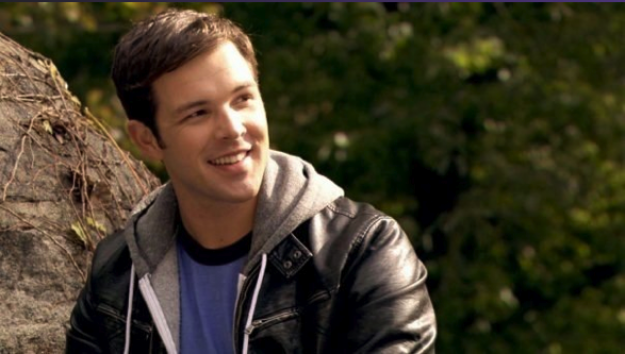 Daniel Robinson (photo) turned down the audition for Friday’s festival opener three times. Now he says the role is a second coming out that brings him–and gay audiences–“full circle.”

“I was kind of hesitant because it was a gay film and about being stereotyped as a gay actor,” he admits to Project Q. “It was like coming out again, but as a gay actor.”

Robinson, who boasts roles in Broadway shows including “Hairspray,” visits Atlanta Friday to answer questions after the Opening Night screening of “The Big Gay Musical” at Out on Film.

The singer-dancer-actor even had concerns about the movie itself when he knew the title but hadn’t seen the script.

“It’s a hard thing for actors to do certain subject matter,” Robinson says. “You feel like you have to back it up.”

He needn’t have worried. He started by having a talk with himself, and his mom, about taking the part.

“I said, ‘Am I going to be out and proud, just be balls to the wall?’ The answer was pretty clear, so I committed to the film, and it was a great time,” he says. “It’s a really good story with a lot of heart.

“I think the title undersells the content and the story,” he adds. “I’m really proud of it.”

Sure, there’s still quite a bit of camp in “The Big Gay Musical,” but in a good way. The movie is clever in its balance of humor and heart. It’s a story-within-a-story about two actors starring in a play called “Adam and Steve: Just the Way God Made ‘Em.”

The characters’ offstage lives mirror their play in some interesting ways. Robinson plays Paul, who after a string of disastrous dates, has a revelation: he just wants to be a slut.

Cue music — of course. It wouldn’t be a “Big Gay Musical” without it.

The movie may sound typical at first, but Robinson says he thinks audiences will be pleasantly surprised with the result.

“I played it very me, very real, and it worked,” he says. “I’m a musical theater loving person, but not a flamboyant person, so I wanted to show my side of the story.”

The movie succeeds in tagging a ton of touchpoints for gay audiences. Paul’s co-star Eddie (Joey Dudding, with Robinson, photo right) comes from a very religious family and deals throughout the picture with how his sexual orientation and faith can coexist.

Not since “The Broken Hearts Club” and “Trick” has a gay movie given us our chuckles as well as eye-opening moments of self-realization.

In fact, “Trick” is one of the movies that brought Robinson to his ultimate decision to do “The Big Gay Musical.”

“I came full circle because the big movie for me coming out was ‘Trick,’” he says. “When I was a kid, one of the reasons I came out was because of gay cinema. This comes back full circle for me because I could give back that same experience to the community.

“It also comes full circle because Steve Hayes was great in that movie, and he plays God in this movie.”

Throw in nudity, scantily clad angels, tele-evangelists, a camp to turn gay kids straight and some show tunes, and we’re there.

Before the “The Big Gay Musical” on Friday, Atlanta’s Cindy Abel will debut her short film “Disturb the Universe,” about the life of her friend, local gay activist Allen Thornell. Thornell died Aug. 3 at the age of 38. Out on Film, which continues through Thursday, Oct. 8, is dedicated to Thornell’s memory.

Find out more about Robinson at his website. View the entire Out on Film lineup with excerpts about some of the entries. You can also check daily listings for the Oct. 2-8 films on our interactive calendar, or visit the Out on Film website for more information, including video previews.

Here’s a taste of “The Big Gay Musical”:

Hamilton, Ga., Mayor Pro Tem Ransom Farley was around 11 or 12 years old when his grandmother told him he was “special.” He realized what...
Read more
Community

Lil Nas X asked fans to pony up for three Atlanta HIV and LGBTQ advocacy groups with the release of his new album “Montero.” The...
Read more
Community

An open meeting took place on Thursday at My Sister’s Room to challenge Atlanta Pride Committee’s internal processes. The upshot was a list of...
Read more